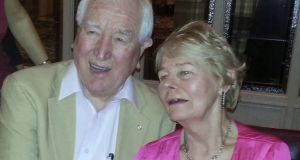 The late John McGroddy, who died from coronavirus in a nursing home in Swords, north Dublin, and his wife Nell.

A family whose elderly father died in recent days from the coronavirus has described his funeral as “heartbreaking”, particularly so as their mother is currently suffering from Covid-19 in a nursing home.

John McGroddy (82) died late on Saturday night in a nursing home in Swords, north Co Dublin. His wife Nell (79), who moved into the nursing home to be near to her husband, has also been diagnosed with the virus and was unable to attend the funeral.

The couple has been together for 50 years and caught the virus within days of each other in the nursing home, which is dealing with a cluster of cases.

One of their sons, Jake McGroddy (50), said their father became very sick after contracting the virus and had not been conscious in his last days.

One of five adult children, Jake said the family was only able to watch through a window when their mother Nell was brought in by nursing staff to say goodbye to her husband after he died.

John Mr Groddy, a retired Garda, had been “extraordinarily popular” around Swords village, his son said. But, in line with recently announced restrictions, only 10 people were allowed to attend the funeral service on Wednesday, and they had to sit apart and socially distance.

“It was a surreal experience, sitting apart, not able to comfort each other, watching your own siblings cry and not being able to console them,” Jake McGroddy told The Irish Times.

“We stood outside apart in the car park afterwards,” he said, and it was as if the normal grieving process had been “paused” during the pandemic.

“It was surreal, everybody back in their own homes, trying to have a funeral afters by yourself,” he said.

The family had lived in Swords their entire lives, and their father was a “cornerstone” of the local area, he added.

“Under normal circumstances there would have been people out the [church] door and down the road,” he said. The service was broadcast online via videolink for those unable to attend due to the coronavirus restrictions.

Nell McGroddy remains in a serious condition in the nursing home with the virus, Jake McGroddy says. “She kept getting temperature spikes, so her consciousness isn’t great …There was a difficulty in her acknowledging Dad’s passing,” he said.

However, he said the staff in the nursing home had been “fantastic” and were keeping the family informed of her condition every day.

Dominic McGroddy (56), the eldest son, said the restricted funeral was a “heartbreaking” day, given their mother was still fighting the virus.

“Over the years I would be sitting with Dad having a pint and we talked about how this day would go,” he said. His father had wanted a “big celebration, that we would sing songs and celebrate his life,” he said.

After he died their mother was taken in to see her husband before he was taken away from the nursing home. The siblings were not able to accompany her, and could only watch on through the window, Dominic McGroddy explained.

Their mother had a mask on and struggled to comprehend what was happening. “That was an awful scene that will always stay with us,” he said.

As the nursing home is in lockdown, the family were not able to be by their father’s bedside when he died. “There was a nurse holding his hand when he went,” Dominic McGroddy said.