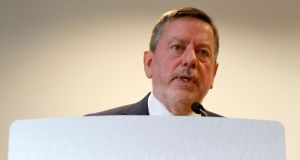 Donal Conway, who will controversially seek re-election to the FAI board

A setting further from the maelstrom that has surrounded the Football Association of Ireland (FAI) following the controversy surrounding John Delaney this year would be harder to find than the grounds of East Meath United last Wednesday.

Manchester City and Ireland player Megan Campbell signs autographs and poses for photos, as does former Ireland legend Richard Dunne. “Put ‘em under Pressure” and the Match of the Day theme tune are played over the PA system. There’s even cake.

It’s no surprise the FAI has chosen this setting for The Irish Times’ interview with Donal Conway, the organisation’s president, who will controversially seek re-election to the board today (Saturday).

Unsurprisingly, after a scarring year, Conway is eager to talk about the FAI’s softer side. “I think there’s an awful lot of unsung, unheard of individuals working across the game.”

However, he accepts that is not a universally-held view, with many seeing it as a “self-serving money-grabbing” organisation.

Today the most contentious FAI agm in years will decide if he will get another term at the helm as delegates vote against a backdrop of chaos in the organisation which Conway says he has been trying to control in the last few months.

The FAI faces two investigations, including one by the Office of the Director of Corporate Enforcement (ODCE). Conway signed off on accounts that have since proved deficient, so should he be seeking a new term before knowing if he will face negative findings?

“I don’t want to pre-judge anything here [but] I don’t think that’s likely,” says Conway, though he does not explain why that is the case, “I have a sense of what’s going to be. I may not see them at all again, I don’t know. I’ve got, though, some sense of my situation with the ODCE.

“The ODCE is a serious investigation and it may have serious consequences for individuals. I don’t think that will be the situation in my case,” he goes on.

Whether he is right, or wrong, the outcome of inquiries will be some way off.

The results of a forensic audit by accountancy firm KOSI, on behalf of the FAI, will be known in the coming months, as will a Mazars report into “issues of concern” such as the FAI’s payment of €3,000 a month for Delaney’s rent.

It is entirely possible that the board, and Conway as president, may be the subject of adverse findings in either or both of these processes. So is it a case that he will be elected again by then anyway, so what does it matter?

“The right thing would be to step away from the FAI, absolutely. And that is what I would do.”.

Under the Companies Act directors have to sign a commitment with each set of accounts which says they have satisfied themselves that the accounts are accurate, including any transactions with associated parties.

A €100,000 loan from Delaney, of course, was not included in the FAI’s most recent set of accounts. Whether there are any consequences for this remains to be seen.

There are also open questions over the financial position of the FAI. Conway says that he expects sponsorship income, far from being damaged by recent events, to in fact go up next year.

Nevertheless, the financial consequences of the recent controversies has been significant, exposing habits within the FAI where it tapped into funds that it should not have touched for years.

The association is talking with Uefa about a €10 million rescue fund, according to some quarters, although Conway is reluctant to talk in detail about it. However, he hopes it will be finalised by the end of August.

“We want to get away from this idea of just being future income streams into the current year; to try to use them when we should be using them. It’ll take us a couple of years to do that. We have probably over-relied on that.”

However, the Uefa bailout appears to rest on a combination of debt and the forward payments that Conway says he is trying to eliminate.

“We will have a combination of loan and advance payments, but we are working to a situation in a number of years’ time where the TV money that we get in 2023 is the money we use,” he says.

Understandably, Conway says that he wants to brief staff, whose employment may be affected, before publicly discussing the final plan, but some jobs are potentially on the line. Much rests on getting this bailout over the line.

The FAI gets between €2.7 million and €2.9 million annually from Sport Ireland for on-the-ground development. It offers the State a stick even though the FAI is a private company and the State has no official status over its.

However, the Sports Ireland money has become a battleground in the ongoing war between Minister for Sport Shane Ross and the FAI. Ross and Sport Ireland have made the restoration of funding contingent on reform.

All parties welcomed the report of a Governance Review Group, endorsed by an egm this month. But now the focus has shifted to Conway’s decision to reverse his earlier decision to step aside.

Ross has written to Conway asking him to withdraw, “to allow for new leadership with credible reform credentials in the best interests of football”.

Sport Ireland, which had become more circumspect, now says it wants all of the FAI board to quit.

Meanwhile, Siptu, which represents some FAI workers, has called for Conway to go.

Uefa and Fifa have expressed concern about Ross’s interventions. Conway agrees: “I think it is undue interference in what is an autonomous body, what is a national governing body for sport.

“I think to start dictating who leads our executive team, who is president of the FAI… that’s a step too far.”

Conway’s pitch to his electorate is a simple one. The governance review recommended that some existing board members should stay in place to guide the FAI through a volatile and complex time

If re-elected he would not chair the FAI board. Instead as president he will chair a Football Management Committee, to guide development of the game. He would remain on the board, which will be in place for a year. Afterwards, he says he will step away.

Yet for some Conway is part of the problem, not the solution. During his 13 years on the board and four years as president Delaney consolidated his power while corporate governance standards allegedly deteriorated. Does Conway feel responsible?

“I’m partly responsible for that, and, yes, I can understand them feeling let down as a consequence.”

He is asking for trust. But has he done enough to earn it?

Delaney’s controversial pay deal, including a €2 million loyalty payment, occurred on Conway’s watch. He says he did not know about this, that the contract’s details were not disclosed, and that the board was told it was being renewed on existing terms.

That, of course, raises the obvious question – if he did not know then he should, as a director with fiduciary responsibility to the organisation, have found out.

“Looking back, yes, I would accept that we should have scrutinised more rigorously some issues that came before the board, and that’s why I’ve said that there’s a culpability on my part.”

Conway says he did not know about Delaney’s rent payments, about FAI funding for Delaney’s 50th birthday party, or alleged payments by the FAI to a company associated with Delaney’s girlfriend.

His error, he says, was in taking things on trust. “I have accepted that I am culpable in that there should have been greater and more serious scrutiny of matters that came before the board.”

Describing the FAI’s culture of the last few years, he says: “There was a real sense you didn’t have a voice, that maybe some people had and some people didn’t. I think there was a kind of a, what would I say, there might be a prevailing view and if you weren’t party to that, or shared that, you tended to be outside. I don’t think criticism was well received and I don’t think that’s healthy.”

Conway says he tried to reduce the problems and made interventions on behalf of people who he felt were being misunderstood or misinterpreted. But again, was he complicit in that culture being propagated?

For years football circles have been alive with gossip about the perks enjoyed by the FAI’s top brass, which has been enhanced by details of Delaney’s lavish lifestyle perks and generous salary and bonuses.

However, Conway’s remuneration is actually extremely modest, according to figures he gives for the first time. He gets a fully-taxed €15,000 per annum honorarium, leaving him with between €7000 and €8000 a year.

He says he does not collect expenses or directors’ emoluments. He does not have an FAI phone, car, or credit card, and does not take money from sponsors or any other body associated with Irish football. He is considering lodging his first expense claim for a recent trip to Uefa, which personally cost him €1,100.

“My involvement with the FAI has never been about money. I was a teacher. I have a pension, I don’t need money from the FAI. Money never motivated me.”

Conway accepts criticism from fans, especially those infuriated by the seizure of anti-Delaney banners. Most recently, it was reported that an alleged attempt was made to hack into a fan WhatsApp group in advance of a protest against Delaney.

And if fans similarly picket about his reappointment?