Assistant Professor of Microbiology in Trinity College Dublin, Dr Kim Roberts, talks to Conor Pope of the Irish Times about face masks, when you should wear them and how you should take them off. 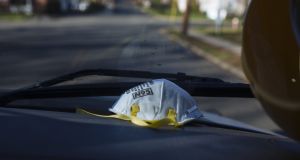 An N95 protective mask sits on the dashboard of an ambulance in Teaneck, New Jersey. Photograph: Angus Mordant/Bloomberg

As the number of people wearing protective face masks in Ireland soars one of the State’s leading virologists has warned that the equipment may actually be doing more harm than good .

Dr Kim Roberts of the Trinity College virology department told The Irish Times that while there was some evidence suggesting face masks when worn correctly can have “a modest effect” on reducing transmission of Covid-19, “if not worn correctly, masks can pose as a hazard and can potentially increase the risk of transmission of the virus”.

She was speaking as their use proliferated around the world, with some countries changing their advice in recent days to make masks mandatory in certain public spaces.

Last week, the World Health Organisation (WHO) voiced concern that the wearing of medical masks by the general public could exacerbate shortages for health workers on the front lines of the pandemic.

Director-general Tedros Adhanom Ghebreyesus noted that several countries were considering recommendations on masks including Austria, which has made them mandatory for people in supermarkets.

He said “first and foremost medical masks must be prioritised for health workers on the front lines of the response. We are concerned that the mass use of medical masks by the general population could exacerbate the shortage of these specialised masks for the people who need them most.”

His comments about supply were echoed by Dr Roberts, who also said it was important people understood the limitations of face masks and how they may give a false sense of security to some people.

She stressed the need to follow clear guidelines when wearing them. Once a mask is on “you don’t want to touch it at all because you have to assume that there may be virus on your hands,” she said,

She also pointed out that wearing a mask “can increase the number of times you touch your face so that increases the risk of potential transmission”.

She highlighted the dangers of people removing masks so they could talk, eat or smoke before reattaching them. And said there were serious issues with people using them for longer than intended. “The masks usually have a usable lifespan of four to six hours, after which they must be disposed of.”

Among the measures she said people would have to follow if wearing masks to lessen the risk of virus transmission was to make sure hands were washed properly before putting the mask on. They would have to be attached in a way that was comfortable “so you are not touching it or adjusting it”.

When the mask is taken off, it must be disposed of carefully, after which the user would have to wash their hands again.

She stressed that masks giving people a false sense of security was one of her main concerns. “They can be of benefit but we have to make sure they are being used on top of other measures such as hand washing, social distancing and staying at home.”

1 Man unidentified in psychiatric hospital for 30 years may have DNA taken
2 Covid-19: One death and 363 further cases confirmed in State
3 ‘Insane’ gathering of hundreds of students in Galway condemned
4 US election: Everything you need to know about Tuesday’s presidential debate
5 Student feels ‘hopeless’ after having six Leaving Cert marks downgraded
Real news has value SUBSCRIBE