Let’s give every newborn €5,500 and invest it to fund their pension

When everyone becomes an investor, corporate behaviour will change for the better 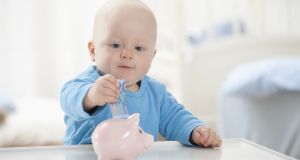 Assuming the return on equities is the same as over the past, that fund will be sufficient to pay out the equivalent of today’s State pension. Photograph: iStock

Lots of appropriately distanced conversations focus on the ways in which the future might be different. Anyone of an excitable, if not radical, mindset relishes the inevitability of an altered economic, political and social landscape. More cautious, conservative types wearily suggest a quick return to an unchanged world.

It’s possible to be sympathetic to both perspectives: inertia is a powerful force in human affairs but the pre-crisis world was not wholly static. One useful way to think about the future is to consider those things that were changing prior to the onset of Covid-19 and imagine how they might evolve now. Trends that were in evidence may end up being accelerated.

It’s more of a stretch to think about trends that may be reversed, but stranger things have happened, particularly if we see well-designed policy initiatives aimed at such change. It isn’t too utopian to hope that one or two egregious problems revealed, or made more evident, by the crisis might actually be tackled.

Cost-cutting is driven by incentives; problems arise when those incentives are skewed

A powerful force in corporate life is the directive from the boss to cut costs. Good businesses always strive for greater efficiency. That’s a positive thing until those cuts go too far: the old warning about cutting into fat rather than muscle is often ignored. Cost-cutting is driven by incentives; problems arise when those incentives are skewed.

One of the ways in which stock markets are too short term is the positive share price response to how much pure cash a business generates. Cash generation can be boosted – at least in the short term – by the simple decision not to spend. That can be on wages, with inevitable consequences. It can be any form of corporate spending: research and development, and all types of capital investment can be cut to generate instant cash.

For years now economists have been mystified by sluggish productivity growth in almost all countries. I suspect that corporate reluctance to spend – to innovate – is at least part of this story. Executives with their share options act quite rationally to boost share prices. This has contributed to income and wealth inequality.

The recent virus-inspired fall in stock markets will have reduced inequality. That’s because only rich people typically own equities. The 1 per cent is the demographic most exposed to the stock market. Prior to the onset of the virus they were doing very well. If things do go back to normal, including the stock market, inequality will resume its rise.

Corporate incentives need to change. Lots of proposals to achieve this have been made over the years, all of which gather dust. Environmental, social and governance (ESG) investing criteria have gradually grown in importance. They will continue to do so. They may even become mainstream. Governments and regulators can play an obvious role with rule changes and behavioural nudges.

I have a proposal that touches on all aspects of this. Every newborn child should be given a grant by the Government of €5,500. This should be deployed on behalf of the child in a ring-fenced, low-cost tracker fund that is invested in a global equity mandate managed under strict ESG criteria.

The grant will eventually pay for itself but higher taxes will be needed, at least for a while

Everyone becomes an investor; the weight of invested money will, eventually, change corporate behaviour. ESG criteria could become central to the investing world. But not without government help.

Assuming the return on equities is the same as over the past, that fund will, by the time the newborn retires, be sufficient to pay out the equivalent of today’s State pension. Invest €17,000 at birth and the resulting pension will be roughly the same as today’s average earnings. This should contribute to reduced inequality and will – eventually – solve the looming pensions crisis. The grant will eventually pay for itself but higher taxes will be needed, at least for a while. There is also a case for the money to come from extra borrowing.

Remote working is the other area governments could easily encourage. Opinion is sharply divided over the sustainability of our current attachment to Zoom and Houseparty. Not everyone is convinced that we have much of an appetite to change our working habits. I strongly disagree.

Working from home is one of those trends evident from before the crisis. But, like the paperless office, previous predictions about how remote working would take over have proved wide of the mark. I suspect the discovery of the convenience of the home office will persuade a lot of people to continue.

Too many firms have a presenteeism culture. Long hours are part of a macho ethic that needs to be squashed

Remote medical consultations are already becoming mainstream, for example. There won’t be the need for quite so many physical GP surgeries in the future.

The sheer joy of not commuting should be enough to persuade many people terrified at the thought of spending more time with their families. Bosses will love the fact that they won’t need to spend so much on office space or toilet paper. But corporate attitudes will have to change radically: too many firms have a presenteeism culture. Long hours are part of a macho ethic that needs to be squashed.

Governments can play a role: many public sector jobs can be done from home, at least for part of the week. And where government leads, the corporate sector should follow.

Imagine that: less traffic and an end to the bubble in commercial property building and prices. We might even be able to repurpose our city centres.