National newspaper sales fell by more than one-fifth between the middle and end of March, according to distributor Smiths News 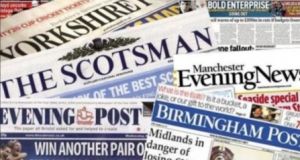 A selection of UK newspapers. Newspaper sales have been heavily impacted by the effects of the Covid-19 lockdown.

Stuart Reddish, who owns the Baxters newsagent and post office in Sheffield, has spent the past few weeks creating “care packages” to deliver essential products to customers who are self-isolating because of coronavirus.

For about £4, Baxters will put together a parcel of items such as bread, milk, eggs and a newspaper and deliver them to those staying in their homes.

“There are some very vulnerable people, often older, completely cut off during this quarantine,” Mr Reddish said. “Many don’t have family in the area.”

While the packages ferry staples to those who need them, Mr Reddish admits they are also a chance to deliver newspapers to customers that would otherwise have remained unsold.

The newspaper industry is facing an unprecedented crisis with the sharp fall in advertising spending accelerating a long-term decline in revenue and forcing many groups to furlough staff and cut pay. But the government-imposed lockdown has created another challenge: how to sell daily print products with far fewer people leaving their homes.

National newspaper sales fell over a fifth between the middle and end of March, according to data from distributor Smiths News and seen by the Financial Times.

Many of the UK’s biggest print media groups have announced emergency measures to get them through the crisis. Local newspaper companies JPI Media and Newsquest are suspending titles and furloughing hundreds of journalists while Reach, which publishes the Daily Mirror, Express and Star tabloids, is also cutting pay and putting staff on leave.

Daily Mail and General Trust, which publishes the Daily Mail, Metro and Mail Online, is not putting journalists on leave but is asking higher earners to take pay cuts and accept shares in lieu. London-based freesheets Evening Standard and City AM, which have been badly affected as commuters stay at home, have also cut salaries.

Many groups cited a precipitous fall in advertising as they unveiled the cuts but delivery has also become a critical issue as customers who bought newspapers during a routine shop visit or on their daily commute stay at home. Up to 4,000 outlets across the country that sell print titles have been forced to shut during the lockdown.

“You have the workmen not coming in picking up The Sun,” Mr Reddish said. “The offices are closed, so the accountants aren’t coming in. I used to sell 14 copies of the Financial Times each day. Now I sell none.”

To combat the collapse, newspapers are pushing for ways to arrive directly on readers’ doorsteps. Many of the country’s biggest broadsheets have promoted websites offering home delivery services such as DeliverMyNewspaper.co.uk, which connects customers with newsagents, in recent weeks.

The platform was originally launched by Rupert Murdoch’s News UK as two separate websites focused on the Sun and the Times. But in 2017 it began including rival publications such as the Guardian and the Daily Mail, acting as a portal for customers to connect with local newsagents.

DeliverMyNewspaper.co.uk has registered 200,000 new customers since the coronavirus outbreak, taking the total to 350,000, a spokesperson said.

The service, which this week will add 26 local papers, delivers 1m newspapers daily. But the sharp increase in users would still only cover a fraction of lost sales.

Meanwhile the Evening Standard has redeployed staff who would usually hand out copies on pavements to delivering it to homes in central London.

One executive at a national newspaper group conceded the move to home delivery may not be enough to save some titles in the coming months.

He also raised the possibility that the pressure would expedite a shift away from expensive printing presses to a digital-only model, following in the footsteps of the Independent, which stopped producing a physical newspaper four years ago.

“The complete print to digital migration was supposed to take two to three years for many,” he said. “You might see it happen in two or three months”.

Magazines have also been badly hit. Data from Smiths showed that sales were down 30 per cent in one week in late March, although this excluded sales from corner shops.

“Anecdotally, we’re hearing that people are looking for small luxuries, such as magazines, during the lockdown period,” said Steve Hannam, a spokesperson for Smiths, who suggested people are more likely to shop at local corner shops during the quarantine.

Mr Reddish at Baxters, whose business relies on people coming into the store each day for a newspaper and packet of crisps, worries that the crisis may prompt a permanent shift in shoppers’ behaviour.

“People might be saying after all: ‘We managed to get all this online, or we watched more telly for that six months, do we really need the newspaper?’ I hope that’s not the case. That would be worrying.”

7 $900 and a battery life of one hour: the first ever smartphone