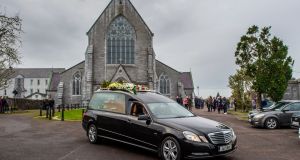 The young man killed by his father and brother in a dispute over who would inherit their family farm in North Cork was described by a close friend at his funeral Mass as “the greatest son that any mother could ever have”.

Mark O’Sullivan (26) was described by his close friend from the University of Limerick, Sharmilia Rahman, as being devoted to his mother Anne whom he accompanied to Dublin last month when she underwent surgery for a serious medical condition. The tribute was read on Ms Rahman’s behalf by Mark O’ Sullivan’s cousin, Barry Sherlock

“Mark was the greatest son a mother could have and I know the bond between Mark and Anne was unbreakable. He had such a big heart and so much love to give as a friend. I know that but I can’t begin to imagine how much effort and love he put into being Anne’s son,” Ms Rahman wrote in her eulogy.

Gardaí believe Mark O’Sullivan was shot dead by his father, Tadg (59) and younger brother, Diarmuid (23) early on Monday, October 26th in a dispute over who would inherit their 115 acre farm at Raheen in Kanturk. It is believed Mr O’Sullivan snr and Diarmuid then shot themselves in a suicide pact.

Due to Covid restrictions, there were just 25 mourners inside the Church of the Immaculate Conception in Kanturk on Saturday while up to 300 others gathered outside the church.

Ms Rahman could not attend the funeral Mass so her tribute was read by Barry Sherlock. His voice shaked with emotion as he read how Ms Rahman recalled Mark’s great kindness to others, evident from when they first met as First Year Law Students in UL.

“Mark was the most caring and selfless person I ever met – so caring and selfless that he earned the nickname, Mother Mark – he could make you feel loved and wanted from the smallest gestures,” wrote Ms Rahman in her recollection of their time sharing a house and holidaying together.

“I struggle to put into words . . . how amazing Mark was. To say he was amazing seems like an injustice to who he really was; he was charming, funny, caring, selfless, bright, hard-working, honest, intelligent but also so much more – words can’t describe Mark for who he was.”

Earlier, Canon Toby Bluitt told mourners that he wanted them to keep Mark’s mother, Anne O’Sullivan, and her extended family in their prayers as they attempted to comprehend Mark’s death and those of his father and brother whose funeral mass he celebrated a day earlier in Castlemagner.

“Grief is never an easy burden to bear – and never more so when it comes to us in what can only be described as an untimely, shocking and tragic way. We gather in such grief today, carrying a burden that not only seems to be, but in fact is overwhelming.

“The shock, the numbness, the devastation, was impossible to imagine and the unfolding news of the loss of three lives was incomprehensible . . . just like all of you, I too am struggling to make sense of this life changing tragedy,” said Canon Bluitt who also prayed for Tadg and Diarmuid.

Canon Bluitt then spoke about Mark, reminding mourners that, like his younger brother, he too had attended primary school in Ballyhass and secondary school in Kanturk before studying law at UL where he graduated in 2017.

“One would imagine that life was full of possibilities for him. One could also say that Mark touched many people’s lives along the way as he journeyed through life. His life and death have changed you all and you will never be the same again.”

After the funeral Mass, Ms O’Sullivan, who is seriously ill, was helped from the church as she followed her son’s coffin before it was placed in a hearse.

Mr O’Sullivan’s body was taken St Patrick’s Cemetery in Castlemagner to be buried beside his mother’s parents, Timothy and Mary Cronin.