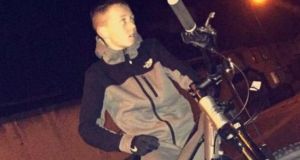 Keane Mulready-Woods (17). His remais were found in two portions in north Dublin in the days following his disappearance.

One of the men arrested in connection with the murder of Keane Mulready Woods has been released from Balbriggan Garda station.

A file will now be prepared and forwarded to the Director of Public Prosecutions. A second man remains in custody at Drogheda Garda station in relation to the investigation.

Late the following night, Monday, January 13th, his limbs were found in a bag dumped on a pavement in Coolock, north Dublin. And in the early hours of Wednesday, January 15th, his hands, feet and head were found in a stolen car that was on fire in a laneway in Dublin’s north inner city.

The 17-year-old was aligned to one of two drug gangs based mainly in Drogheda who have been involved in a bitter feud for about two years. Mulready-Woods, who had convictions for threatening and intimidating people in Drogheda, was the third person to die in the feud.