An Taoiseach Leo Varadkar says that he is "confident" that the solidarity displayed towards Ireland by outgoing EU Commission president Jean-Claude Juncker with regard to Brexit will continue under Ursula von der Leyen. Video: EU Council 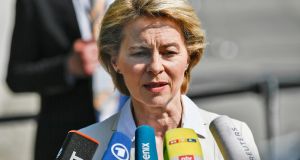 Ursula von der Leyen, a centre-right minister and the first woman in Germany to serve in the defence post, will be joined in the “top jobs” package by Christine Lagarde, who will head the European Central Bank.

European Council president Donald Tusk, who brokered the deal between the national leaders on the council, will be replaced by Belgium’s acting prime minister, the liberal Charles Michel.

Spanish socialist Josep Borrell will be appointed to the EU’s top diplomatic job of high representative for foreign and security policy.

The deal was reached yesterday evening after weeks of disagreement between EU leaders culminating in the emergency summit which began on Sunday in Brussels.

Yesterday, however, the exhausted leaders agreed a package of names that balanced party, gender and geography, after the surprise suggestion of Ms von der Leyen. Her name emerged following a meeting between Dr Merkel and the French president Emmanuel Macron.

She will now fill one of the most important roles in the EU, heading up the union’s civil service and policy engine.

Leaving the meeting, Mr Varadkar said he was very pleased with the outcome. The new appointments were “friends of Ireland”, he said, paying particular tribute to the nomination of Mr Michel, who had taken active part in council discussions on Brexit.

“I’m really happy to see Charles Michel in there as president of the council, a friend of Ireland . . . As a Belgian prime minister he really understands Brexit issues because they are among the most affected by it.”

Ms von der Leyen, he said, was a member of the German CDU and from the same European People’s Party political family as Fine Gael. He insisted the EPP “had always stood by Ireland”.

Mr Tusk said he was particularly pleased with the “perfect” gender balance in the four top jobs. The meeting “had taken longer than planned but was still on time . . . It was worth waiting for such an outcome.”

Mr Varadkar’s main preoccupation over the three days had been to ensure the EPP retained its control of the top commission job. That has happened, although he acknowledged the parliament’s spitzenkandidat system, devised essentially to give MEPs nominating rights for the commission job, would now have to be reviewed ahead of the next elections in four or five years.

The leaders also agreed two of the spitzenkandidaten, Frans Timmermans and Margrethe Vestager, already serving as commissioners, will be appointed vice-presidents of the new commission.

And the third, the EPP’s original candidate for commission president Manfred Weber, will get to share the five-year term of European Parliament president with Bulgarian socialist Sergei Stanichev, assuming MEPs – who gather in Strasbourg again today – agree.

MEPs will also get to vote on the full new commission, including the high representative, when they have been nominated. Mr Varadkar is expected to put EU agriculture commissioner Phil Hogan’s name to Cabinet for approval shortly.