Greyhound and coursing bodies to face questions on animal welfare 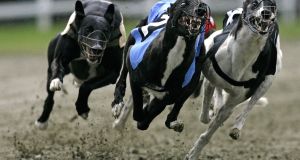 Barry’s Tea and FBD Insurance have pulled their sponsorship of greyhound racing following the RTÉ Investigates programme on the industry. Photograph: Peter Kohalmi/AFP/Getty

The Irish Greyhound Board and the Irish Coursing Club have been asked to appear before the Oireachtas committee on agriculture next week to face questions about animal welfare.

Committee chair and Fine Gael TD Pat Deering said the two bodies would be asked at a meeting next Tuesday about what structures they had put in place to deal with the recent revelations about the mistreatment of greyhounds.

“We want to see exactly how quickly they will do this. The Irish Greyhound Board will have received €16 million in Government funding last year. We will be looking to see how much of this will be ring-fenced on animal welfare and rehoming. Only a small amount is ring-fenced currently and I personally think that needs to be ramped up considerably to deal with the matters that were raised last week.”

The committee will also hold further hearings on the matter in September when they may ask officials from the Department of Agriculture and animal welfare groups to appear.

It comes after Barry’s Tea and FBD Insurance pulled their sponsorship of greyhound racing in the aftermath of the RTÉ Investigates programme on the industry.

Both companies had said over the weekend that their sponsorship of the sport was under review, but in separate statements on Tuesday they confirmed they would be ending their relationships with various races around the country.

In a statement, Barry’s Tea confirmed that “further to revelations highlighted in a recent RTÉ Investigations programme, which raised concerns over the treatment of dogs within the greyhound industry in Ireland, Barry’s Tea have decided to withdraw its local sponsorship of the annual race in Curraheen Park, Cork”. The company said it was “saddened and horrified” by the programme.

FBD said on Twitter on Tuesday that “our sponsorship of greyhound racing was a small sponsorship arrangement with Kilkenny Greyhound Stadium. Following the recent RTÉ Investigates Programme, FBD has decided not to renew this. We look forward to the implementation of urgently needed animal welfare measures by the Government.”

Industry sources put the figure for sponsoring the Cork race in the region of €10,000, with greyhound racing seen as one of the cheaper options for sports sponsorship. The FBD sponsorship is also thought to be for a relatively small amount.

However, the decision of two household names to pull their sponsorship from the sport is significant, industry sources said, as the sport has struggled to attract sponsors beyond bookmakers in recent years as attendances and live television coverage have dwindled.

The move may increase the pressure on more important sponsors such as bookmaker Boylesports. A total pot of €300,000 was available for the Irish Greyhound Derby last year, which is sponsored by the bookmakers.

A spokesman for Boylesports, which is the sponsor of the largest number of races listed on the Irish Greyhound Board (IGB) website, said that the bookmaker’s position was unchanged since last weekend, when it said it was “appalled” by the programme, but stopped short of saying it would review its sponsorship, saying it would engage with the IGB on the future development of the sector to ensure the safeguarding of greyhounds.

The IGB thanked Barry’s Tea for their support of the sector and said that it “continues to engage with our sponsors on our strong commitment to the welfare of racing greyhounds”, and that it was working to implement a package of measures approved last week and aimed at improving animal welfare.