Miriam Lord: Richard Bruton is like an oxygen eater in an upturned boat 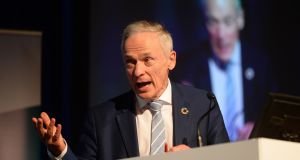 Exactly 10 weeks to go to the National Ploughing Championships.

The biggest outdoor event in Europe is taking place in Carlow this year. It’ll be all go in Ballintrane for three days from September 17th. Funnily enough, the Dáil returns from its summer recess on the same day. But with a general election on the horizon, politicians will be beating a path to the midlands, resumption or no in Leinster House.

We hope the Taoiseach doesn’t have more pressing demands on his time when these hugely important dates in the Irish agricultural calendar roll around. He might have to wash his hair or take his mammy to the shops or something.

Same goes for the Tánaiste. And the rest of the Cabinet. Even those who don’t have any hair.

And you never know the day nor the hour when somebody might fall off a swing and hurt themselves and not be able to scuttle around a few trade stands and have photographs taken with a litter of piglets and somebody from RTÉ.

Obviously, the Minister for Agriculture has no choice but to attend and face the firing squad. But maybe he can slip in very early and then hide. You hardly see or hear Michael Creed around Kildare Street at the best of times, so that won’t be too difficult, but unfortunately farmers are the undisputed champions of the Men and Women Who Get Up Early in the Morning.

Such is the depth of worry in the sector, Michael Creed has gone out on a limb and declared himself 'very concerned'

The few rural-based Government TDs in for Leaders’ Questions couldn’t have looked more downbeat had they lost the prestigious brown bread competition at the Ploughing by a short, eh, bread.

It’s all down to Mercosur, which may sound like a continental supermarket chain but is the huge South American trading bloc which has reached a draft deal with the EU after a mere 20 years of negotiations.

Irish farmers – particularly the beef sector – are fuming. Farming organisations were out in force over the weekend following the announcement of an agreement, predicting devastating losses for the beef industry and serious environmental implications.

Such is the depth of worry in the sector, Michael Creed has gone out on a limb and declared himself “very concerned”.

On the Dáil’s first day back since the agreement, all parties and groups lined-up against the Government in opposition to the draft deal.

Climate change may be the existential question of our time, but it is still a novelty to hear party leaders holding forth on the destruction of the Amazonian rainforests during Leaders’ Questions.

Even the Healy-Raes went global for the day that was in it, although Danny, who doesn’t hold with all this climate change malarkey, stuck to the beef.

The Taoiseach and Tánaiste were out of the country, so it fell to Minister for Communications and Climate Change Richard Bruton to fill the Leader’s slot.

When opponents are spitting fire, demanding answers, further time for debate and a final say in how Ireland votes, there is no better man than Richard to face down the angry forces across the floor.

He is like moss on a lawn. An oxygen eater in an upturned boat. The man could smother a raging forest fire by just talking to it. When the opposition erupts with questions, Bruton the fire blanket neutralises them with a numbing flow of smooth economist balm.

Micheál Martin railed against this “environmentally unsustainable” trade deal. What is the Government going to do about it?

Very significant concern. . .fully understand. . .Ireland continuing to press concerns. . .need to take time to evaluate this as a whole. . .look at how to deal with it as it unfolds. . .legal considerations. . .phasing period. . .small open economy.”

But what about Brazil? Micheál Martin has the measure of that country’s leader. “The Trump of the Tropics” is what he is called, he reminded the Minister for Climate Change. “The behaviour of the Brazilian government in respect of the Amazon rainforest should be a showstopper” for the Mercosur deal. “This should be a showstopper right now.”

President Bolsonaro might say Brazil will adhere to the Paris Agreement, but “it means nothing to this leader. Absolutely nothing”.

Nonetheless, we have to evaluate and look at everything in the round and as a whole, soothed the Government’s chief damper downer.

Sinn Féin’s Mary Lou McDonald was worried too. The deal is a sell-out of Irish farmers and their families, she thundered.

No more than Micheál, she couldn’t believe the Government is prepared to sign a deal with Brazil where the president has no problem with destroying the rainforests and indigenous communities “in order to increase the profits of a few millionaire beef exporters”.

Twice, she had to “insist” the Dáil be given a say on the matter.

Richard threw out the fire blanket. You can’t isolate governments and then expect them to row in behind international climate change protocols. Instead, the deal has a number of clauses written into it to achieve compliance.

“They are part of a multilateral strategy to try to deliver the climate protections that we all crave.”

“Crazy”, spat Michael Healy-Rae. Irish farmers are being told to reduce animal stocks and plant trees. Now Mercosur is bringing in countries which don’t have the same level of traceability or production standards while felling thousands of acres of rainforest to raise the beef they want to sell to us.

But what would you expect, he sighed. The Taoiseach has already said he was “going to save Ireland by reducing his own meat intake”.

Michael still isn’t over the time Leo said he was cutting down on red meat for health reasons.

“The European standards will not be diluted one jot,” insisted Richard, in full smother mode.

“It is also worth recognising that there are threats and opportunities and we have to work our way through them.”

The Opposition had to have a row instead about time allocated to debate the deal.

“It is causing significant concern across the land,” said the Fianna Fáil leader, with every other leader and spokesperson, from all sides of the political spectrum, agreeing with him.

He went so far as to suggest the Dáil would sit an extra week – the summer recess starts at the end of next week – but extra hours were found to ward off such an appalling vista.

This draft deal will be around for a while. So too will the farmers.

No doubt Government Ministers will be given a broadly courteous reception when they, if they have the bottle, brave the Ploughing.

Though it might be an idea to close the milkshake stall.