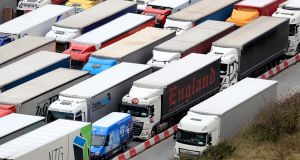 Lorries queue to enter the Port of Dover in Kent, England. A new design which could change the appearance of lorries, making them safer and more energy efficient, is expected to be approved by the European Parliament in Strasbourg on Tuesday. Photograph: Gareth Fuller/PA Wire.

A new design which could change the appearance of lorries, making them safer and more energy efficient, is expected to be approved by the European Parliament in Strasbourg on Tuesday.

The aerodynamic design is aimed at reducing CO2 emissions and increasing visibility and includes more rounded, longer cabs which have space for drivers’ toilets and showers.

But the plans have been given a tepid response from the European Automobile Manufacturers Association which let it be known that the vehicles may not be ready for introduction by the start date of September 2020.

The design of lorries permitted on the EU’s roads is regulated by the commission, which has been steering the necessary legislation through the EU institutions for about seven years.

The commission said measures now expected to be approved by the European Parliament “will considerably improve the aerodynamics of vehicles, saving approximately €5,000 per year in fuel costs for a typical long-distance lorry covering 100,000km”.

This represents a 7-10per cent cut in greenhouse gas emissions or 7.8 tonnes of CO2 for the same long-distance lorry covering 100,000 km.

“At the same time, the field of vision of the driver would be improved and new safety devices like energy absorbers could be deployed, helping to save the lives of 300 to 500 vulnerable road users such as pedestrians or cyclists every year,” the commission said.

The design represents a compromise between the regulators and the manufacturers with manufacturers reluctant to shorten the goods area of vehicles to accommodate the more aerodynamic approach. Under the compromise, manufacturers may make longer lorries if the additional length is in the cab area only.

The next step is for manufacturers to receive “type-approval” from the EU for detailed specifications . But the European Automobile Manufacturers Association said: “The EU truck industry calls upon member states and the EU institutions to finalise these specifications as soon as possible.”

James Nix, freight director at advocacy group Transport and Environment said “the next question is how soon manufacturers will take advantage of the EU’s new design blueprint.

“The EU has rolled out the red carpet for the next generation of truck cabs. If European truckmakers don’t deliver them, then US and Asian manufacturers will. The race is on,” he said.