Inquiry after mother of newborn baby found dead in hospital 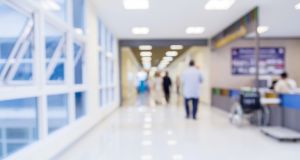 File photograph: The incident is being treated as a tragic accident, although the cause of the woman’s death is not yet known. Photograph: iStock

Cork University Maternity Hospital has begun an investigation after a mother was found dead on the floor of her room in the hospital with her newborn child underneath her.

Her baby, who was found on the floor of the room at the breast of her mother, was seriously hurt in the incident and is receiving emergency treatment in the hospital.

The incident is being treated as a tragic accident, although the cause of the woman’s death is not yet known.

Staff checked on the woman, who was in her 30s and in a single room in the hospital, at 7am on Monday morning, and found nothing amiss.

However, when doctors arrived on their ward round an hour later, they found her lying on the floor with her child, who was born at the weekend, underneath her.

One possibility being investigated is that a medical episode caused the woman to fall out of bed while she was breastfeeding.

The South South-West Hospital Group, which includes CUMH, confirmed an investigation was under way following a “tragic occurrence” in the hospital on Monday morning. “Our priority is supporting the patient’s family and therefore we will not be commenting on the individual case at this time.”

The incident has caused shock and upset among staff working in the hospital.

CUMH opened in 2007 in a purpose-built building with mothers who have delivered babies accommodated in a variety of one-, two- and four-bed rooms.