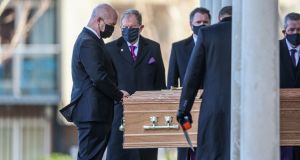 Dr Emer Feely, the wife of chief medical officer Tony Holohan, was “a ray of sunshine that could brighten up the dullest of Mondays”, her daughter told her funeral on Monday.

Dr Feely, a specialist in public health medicine and a medical graduate of UCD, was diagnosed with multiple myeloma, a terminal form of blood cancer, in 2012.

She died peacefully on Friday at Our Lady’s Hospice in Harold’s Cross, Dublin, in the company of her husband and her children, Clodagh and Ronan.

Speaking at her funeral Mass in St Pius X church in Templeogue, the same church in which she was married 25 years earlier, her son described Dr Feely as “truly one of a kind”.

“She was one of those people who had the ability to click with any person she met. She had such a sharp wit and her sense of humour was like no other,” he said.

Clodagh said her mother “epitomised the word ‘brave’ ” since her diagnosis.

“We feel so fortunate to have had the privilege of having her as our mom. She was a warm, kind-hearted, caring, bubbly, funny, trustworthy and selfless person,” she said.

“She was a shoulder to cry on, despite all of the hardship of the last eight years. She always put others before herself. She always managed to put on a brave face.”

Dr Holohan described his wife as a “loving, caring, warm, witty and sunny person”, who lived for her family.

“For it was Clodagh and Ronan that kept you going and in them, and the people they are, all that they have, and will achieve in their lives, that your greatest legacy will be felt,” he said. “They were in primary school when all of this began. You guided them from there along the path from adolescence to adulthood, which was your goal from the start. You achieved it.

“You amazed the medical professionals who looked after you and defied their many predictions through sheer determination to live for as long as you could and to do that for Clodagh and Ronan.”

Fr John Brown, celebrant of the Mass, said Dr Feely had been “taken from us too soon”, adding “she had so much more to give”.

“Emer always had a smile. That smile is very infectious. It draws you into her friendship. I met Emer for the first time as a chaplain in St James’s Hospital. We shared many conversations on her journey of sickness and suffering.

“Like any mother, she would have wished to remain on and be with her family. She persevered as long as she could. She is now relieved of her suffering and pain.”

Fr Brown spoke of Dr Feely and Dr Holohan’s relationship. The pair met when taking the same medical class in University College Dublin, and their commitment to health, he said, showed they were “meant to be”.

An instrumental recording of Falling Slowly by Glen Hansard and Markéta Irglová was played during the offertory of the Mass. Near the end of the ceremony, Debussy’s Clair de Lune was played. Musician Lisa Hannigan recorded a version of A Prayer for the Dying which was played at the ceremony.

Caroline Burke, aide-de-camp to Taoiseach Micheál Martin, and Stephen Howard, aide-de-camp to President Michael D Higgins, were also in attendance to “pay their respects to one who gave so much to our nation”.

Dr Holohan took time out from his work duties last summer to help with the care of his wife after she entered palliative care in early July. He returned to his duties in October.

Following the announcement of her death, several politicians, including Mr Martin and Minister for Health Stephen Donnelly, released statements offering their condolences to the family.