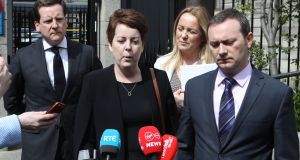 Ruth Morrissey and her husband, Paul Morrissey, who were awarded €2.16 million after winning their landmark action in the High Court on Friday. Photograph: Collins Courts

The High Court has ruled that the HSE was entitled to an indemnity against two US laboratories for all of the €2.16 million award, except for a sum of €10,000 in nominal damages awarded against the HSE over the non-disclosure of smear-test audit results.

Mr Justice Cross made the ruling in the case of terminally-ill cervical cancer patient Ruth Morrissey and her husband, Paul Morrissey, of Monaleen, Co Limerick. On Friday they were awarded €2.16 million over her CervicalCheck smear tests after winning their landmark action.

The couple sued the HSE and two US laboratories . It was alleged there was failure to correctly report her smear samples taken in 2009 and 2012 and that her cancer spread unidentified, unmonitored and untreated until she was diagnosed with cervical cancer in June 2014.

The HSE, the judge said, no less than the two laboratories – Quest Diagnostics and MedLab laboratories – had a liability to Ms Morrissey as the organisers and being responsible for the cervical smear tests.

The HSE also provided for the manner in which the screening should be conducted and how it should be reported, he said.

Had the HSE not contracted out the screening programme to Quest Diagnostics and MedLab laboratories, it was a service it would have provided itself, he added.

Mr Justice Cross said it would have been preferable in this case had the HSE merely put liability in issue.

He said the HSE admitted from the start that, were any of the slides negligently read, it had a liability and pleaded it was entitled to an indemnity against the laboratories.

The judge said it would be unreasonable to expect the HSE to admit liability just because the slides were misread and each case must be assessed on its merits. He concluded that the HSE was not to be penalised for taking such a decision in relation to liability before there has been any judicial pronouncement on that topic.

Earlier in his judgment, he said the cervical smear-testing programme was in itself “entirely admirable and is an important aspect of healthcare being provided or under the auspices of the HSE to the public”.

He said the public outcry in these cases had tended to misstate the issues and not be of any assistance to those given what “so ominous a diagnosis”.

Homeless have ‘no legal right’ to pitch tents, says council chief 18:52
Almost 10,000 on the spot fines issued for Covid-19 breaches 18:45
No guarantee all schools will be back in operation by mid-April, Ryan warns 18:20
Coronavirus: 29 further deaths and 776 new cases reported as Glynn urges parents not to resume mixing 18:10
Body of third man found near where two brothers murdered on Cork farm 17:43