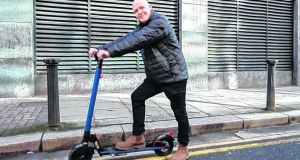 Bringing an electric scooter into The Irish Times newsroom generated the same level of excitement as a Chopper bicycle might have done in an Irish school yard in the 1970s.

Almost instantly, a small crowd formed around it as otherwise serious-minded people begged for a go on it.

Other similarly serious-minded people looked suspiciously at the scooter, a child’s toy re-imagined for an adult world, and appeared hamstrung by the self-doubt and seriousness which frequently curse grown-ups.

But whether they wanted a go or wanted to pour scorn on it, what everyone really wanted to do was talk about what is clearly becoming the next big thing in Irish commuting.

And it wasn’t just in the newsroom that the scooter attracted interest. In shops, pharmacies, lifts and on the street people approached the little machine armed with questions and curiosity.

How much does it cost? How fast does it go? What’s the range? Do you feel stupid? Is it legal?

More than 2,000 electric scooters are now regularly travelling the roads of Dublin – a fraction of the number to be found in US and European cities – and while the scooter clearly rekindles childhood memories in virtually everybody who sees it, it has the potential to do so much more than that.

They are a novel, yet obvious, solution to the chronic and worsening congestion of our towns and cities and while they will not take people great distances, they will get them short distances almost effortlessly, involving as they do no pedalling.

Scooters are also unlikely to fall victim to thieves, because they can be folded up in less than 15 seconds and brought anywhere, avoiding the need to leave them locked up in public.

The absence of suspension aside, the ease of use is another one of the electric scooter’s great downsides

In recent weeks, scooters have attracted some scepticism in the corridors of power with dark mutterings about a need to regulate them so users don’t abuse the power they have by taking them onto footpaths or the road lanes normally reserved for bikes and buses.

There is a danger officialdom might tie itself in knots over something which is nothing more than a handier and more relaxed alternative to a bicycle.

But what’s it like to ride on the streets of Dublin during rush hour?

Initially it is terrifying – but after maybe 90 seconds that fear dissipates and it is not unlike riding a bike.

It is steady over potholes and maintaining balance is effortless.

The top speed of the scooter loaned to The Irish Times by Ciaran Hughes of gyrowheel.ie was 30km/h.

While that might sound fast, it was considerably slower than many of the cyclists we met along the north quays on Friday morning.

A 3km journey from the Phoenix Park to College Green at the height of rush hour was completed in just under 10 minutes and because the small motor did all the work, the distance was covered without some much as a single drop of sweat being lost en route.

The absence of suspension aside, the ease of use is another one of the electric scooter’s great downsides.

Riding a bicycle will enhance a person’s fitness as will walking but scooting – while not as sedentary a means of commuting as driving a car – will not get the heart racing.

What it will do though is enable someone get through the city centre at rush hour faster and with a whole lot less stress than someone in a car.

The charger is the same size as a laptop’s and the battery will go from almost empty to full in around three hours.

At 12kg, the scooter is also sufficiently lightweight and compact to be carried into shops and onto public transport or taxis and would quite happily live in the boot of a car when not in use.

The big question is, however, if our towns and cities would be better places to live and work if more people were to abandon their cars and take to their scooters and the unequivocal answer has to be yes.

They may not be the jetpacks we were promised we would have but scooters are, at least, a start.