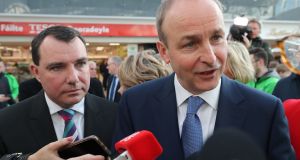 At least one campaign issue has managed to bring the debate temperature down, in a manner of speaking.

When it comes to the mystery surrounding the legality of rent freezes, there appears to be as much consensus as there is on the broader issue of how best to address Ireland’s overall housing crisis.

Fianna Fáil leader Micheál Martin considered a rent freeze, and then he didn’t (citing legal advice on constitutionality). Taoiseach Leo Varadkar says it is not the solution but Labour leader Brendan Howlin insists it is.

It could leave the greatest legal minds cold. Outlining her party’s housing policy on Monday, Sinn Féin president Mary Lou McDonald was unequivocal, saying such a move would be constitutional on a “time-limited” basis. “I have heard others argue a different case; I think they’re wrong,” she said. “It’s entirely doable.”

Cold comfort, though, for anyone already caught in the rental market trap.

Meanwhile, Varadkar was cunningly distracting from the issue by warning that future governments may have to “freeze pensions”.

I can’t justify the fact that there are nearly 10,000 people homeless in our country ... it is a stain on our society

If the general election doesn’t put you to sleep, the Super Bowl will. Well, judging by this picture doing the rounds on social media, that might be the view of Declan Kelly, brother of Labour TD Alan Kelly.

An ardent sports fan, the chief executive of consulting company Teneo was filmed by an American football fan at what is arguably the biggest and most sought-after game on the US calendar.

It was been dubbed “the world’s most expensive nap” by New York Times writer Amy Chozick.

“Somehow this man is sleeping through the #SuperBowl,” another Twitter post attached to the footage said with naked disbelief. “We’re still only in the first quarter.”

5,000 – The number of birch tree saplings being handed out by Mayo Labour candidate Kamal Uddin in place of campaign leaflets

As Sinn Féin’s stock rises in the polls, it is especially strange to see them follow the campaigning lead of Boris Johnson and hardline Tories.

In what appeared to be a considered move, party leader Mary Lou McDonald accused Fianna Fáil and Fine Gael of adopting a “project fear” approach to the general election, evoking a very effective turn-of-phrase widely used during the UK’s bitterly fought referendum on EU membership.

“I believe that project fear from the two big parties is now well and truly under way,” McDonald wasted no time in saying on Monday when asked her views on anticipated attacks from the two largest parties.

By contrast, she said, Sinn Féin would set out its economic policies “calmly”.

Boris would be proud. Although the phrase also popped up in the Scottish independence vote, the British prime minster gave it a new lease of life in the Brexit build-up as a cutting phrase used to turn public opinion on remainers and their prophecies of economic doom in the event of an EU departure.

“This is all part of the attempt to spook people. I think actually it will be very calm,” he said at the time, in a comment not a million miles from McDonald’s.

A rhetorical, if not political, match made in heaven.