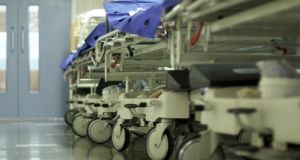 The INMO said 10 of the patients without beds were children aged under 16 years. Photograph: iStock

There was a spike in the number of patients on trolleys waiting for hospital beds on Tuesday, figures show.

There were 640 patients considered by doctors to require admission to hospital waiting on trolleys in emergency departments or on wards.

The Irish Nurses and Midwives Organisation (INMO) said it was the highest trolley figure since a record level of overcrowding was experienced on January 7th.

The INMO said 10 of the patients without beds were children aged under 16 years. It said eight children were on trolleys in Temple Street Children’s University Hospital.

INMO General Secretary, Phil Ní Sheaghdha, said:“This is a dangerous and unacceptable figure, with worryingly high numbers of patients without beds across the country.”

“When Ireland votes later this week, health will rightly be a major electoral priority. All parties and political leaders must commit to lifting the recruitment freeze, funding safe staffing levels, and fully implementing the Sláintecare reform package.”

“This is an intolerable situation for vulnerable patients and frontline workers alike. Nobody should have to endure this in a modern health service.”

1 Bernie Sanders cements lead in Democratic race after win in Nevada
2 Coronavirus: Almost 60 new cases recorded in Italy as two die
3 Archbishop: Sex abuse of women by L’Arche founder ‘reprehensible’
4 Ryanair’s Michael O’Leary under fire for comments on Muslim men
5 The view from Clondalkin: If Sinn Féin don’t get in, ‘there will be marches’
Real news has value SUBSCRIBE