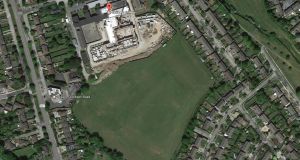 The 7.5 acres of land is owned by the Christian Brothers religious congregation, and is to be sold to a local property developer.

ERST owns 96 primary and secondary schools that were previously run by the Christian Brothers, and it maintains a Catholic ethos. The religious congregation transferred ownership of the schools, one of which was Clonkeen College, to ERST in 2008.

The headquarters of the schools trust is located beside Clonkeen College secondary school in south Dublin.

A letter from the Christian Brother province leader in Ireland, Edmund Garvey, to the Department of Education reveals that the ERST headquarters building is to be included in the congregation’s land deal with a local homebuilder.

The price agreed between the Christian Brothers and local property developer Patrick Durkan snr for the 7.5 acres of land is reported to be just under € 18m*.

The letter, obtained by The Irish Times, outlined that as part of the deal ERST will receive € 4 million out of the € 18 million sale.

The Christian Brothers said the sale of the land is necessary to allow the group fulfil its cash obligations to the State redress scheme for victims of historical institutional abuse – with € 10 million from the land sale going towards the redress scheme.

The congregation has also offered Clonkeen College a cash donation of € 1.3 million from the sale’s proceeds, to compensate the school for the loss of the land previously used as playing fields.

The Christian Brothers has said the donation could be used to develop an all weather sports pitch beside the school.

The letter stated that the Christian Brothers and the property developer “have exchanged legally-binding contracts”, and the group cannot reverse the transaction.

The school principal, Edward Melly, said the school believed that despite a legal contract being signed the land has not been formally sold or transferred to the property developer.

Legal representatives for the school have challenged the proposed land sale, citing an agreement in 2006 where the school was guaranteed use of the playing pitches.

The Christian Brothers rejected the school’s claim that there was any mutual agreement in place over use of the playing fields.

*A previous version of this article indicated the value of the land to be sold by the Christian Brothers was worth € 26 million. The € 26m figure referenced in the congregation’s letter included the value of proceeds from the land sale, as well as the value the Clonkeen College school land itself, which was donated to ERST in 2008.

Garda launches coastal operation in Sligo and Leitrim to tackle crime 20:00
Early batch of child flu vaccine to expire within weeks after poor uptake 19:24
Keep up momentum to support older people in their homes, urges Alone 19:13
Postmortems due on two men found dead at hostel in Waterford city 19:06
Prisoners allowed one visit over Christmas period due to Covid-19 18:50