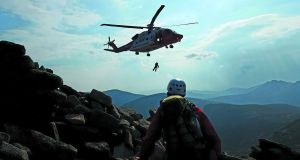 The Garda-led search for two missing Irish Coast Guard airmen is continuing with a Donegal fishing vessel working areas of the seabed around Blackrock island off north Co Mayo.

Swell around the rock where the Rescue 116 helicopter crashed delayed efforts on Monday, but Supt Tony Healy of Belmullet Garda station said conditions had settled later in the evening.

CHC Ireland, employer of the four air crew who died in the crash on March 14th, is sponsoring use of a Killybegs fishing vessel MFV Westbound which has been fitted with a “bespoke” trawl.

Supt Healy said the primary goal is recovery of the missing crew, but the effort was also “cognisant of the ongoing Garda investigation”.

The area has been extensively mapped, and the fresh search had been planned for some time, he confirmed.

Garda Water Unit divers have travelled to Blacksod for the search, and Irish Coast Guard units are on standby for further aerial and targeted shore scans.

The 16-metre MFV Westbound has been fitted with specially modified gear donated by the international netmakers Swan Net-Gundry of Killybegs.

The effort faces a number of challenges, as the approach to the island is marked by hazardous geological formations. Weather may also break mid-week.

The Irish Lights ship Granuaile is due to return at the weekend with a remotely operated vehicle (ROV) ,which will focus on “areas of interest” identified in the trawling. The Air Accident Investigation Unit (AAIU) has said the planned operation was a matter for the Garda, as it related to “the continued search for the two missing crew members and the gathering of evidence”.

An AAIU spokesman said it remained on standby to assist the Garda if so required.

1 How one couple’s weekend away resulted in 30 Covid-19 cases
2 Miriam Lord: Government’s latest comedy of errors offers little to laugh about
3 US presidential debate: who won, was it any good, were there any surprises?
4 Taoiseach tells TD to ‘cop on’ over criticism of contact tracers asking about pubs
5 US presidential debate in quotes: ‘It’s hard to get any words in with this clown’
Real news has value SUBSCRIBE