Advocacy group believes 9% rate should be phased out and restored to 13.5% 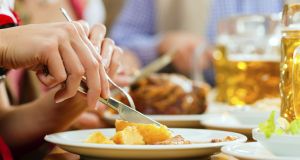 The 9 per cent rate for special tourism-related activities, such as restaurants, hotels, cinemas, was introduced in 2011.

The lower VAT rate for the hospitality sector should be scrapped, according to Social Justice Ireland.

The independent thinktank and justice advocacy organisation has recommended the 13.5 per cent VAT rate should be restored for the accommodation sector in Budget 2018, as part of a two-year process to phase out the 9 per cent VAT rate for the hospitality sector. It said this would yield €189 million in 2018.

At the launch of its pre-Budget submission in Dublin on Monday morning, Michelle Murphy, research and policy analyst at Social Justice Ireland, said they were proposing that the 9 per cent rate be phased out over a two-year period “because it’s very difficult to justify a lower VAT rate, in particular for the accommodation sector at the moment”.

The 9 per cent rate for special tourism-related activities, such as restaurants, hotels, cinemas, was introduced in 2011 to encourage growth and employment in the sector.

Minister for Transport Shane Ross said he is in favour of keeping the 9 per cent rate. “I’m very, very keen that the hospitality sector should be protected because of the huge need of tourism at the moment particularly in the light of Brexit and the fact that there is so much employment and how successful the reduction was,” he said in Dublin.

The measure is strongly supported by the Irish Hotels Federation which said it has helped to create some 50,000 jobs in the industry over the past five years.

Social Justice Ireland has called for an extra €500 million to go towards increasing resources needed to provide an additional 90,000 social housing units along with €450 million to help complete the rollout of a high-quality rural broadband network.

The organisation recommended an increase of €5 a week on social welfare payments, an equalisation of jobseekers rates for under-26s and a rise in direct provision payments. It said €346 million was needed to finance such measures.

“They want to see the lack of childcare addressed, and investment in climate mitigation, rural broadband, and much more. These should be the priority targets of Budget 2018.”socialjustice.ie/content/publications/budget-choices-2018