Overall, national suicide rates have dropped to their lowest level this century 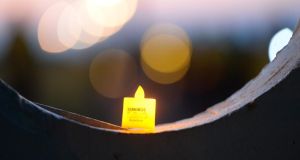 The Darkness Into Light event, part of the campaign against suicide and self-harm. Photograph: Dara Mac Dónaill

Some weeks back, Tom O’Reilly met a young man at a cattle mart. “I wonder would you go and see someone – he is down,” the young man told O’Reilly, a farmer from Co Cavan who runs Northwest Stop, a voluntary counselling service for people having suicidal thoughts.

“He hasn’t come out much lately, he’s given up on going to the mart. He gets his silage in and he doesn’t want to do anything else,” the young man told him.

His neighbour was “showing signs that he just wasn’t caring any more”.

O’Reilly, a former Cavan GAA chairman who runs the service on a shoestring budget with no State funding and who estimates that it saves up to 75 lives a year, went to see the young man’s neighbour.

During the chat, the man told him his wife had died some years back and his grown-up children had moved away – “There is no future for his children in rural Ireland” – and they didn’t get home often any more.

“So, he’s caught,” says O’Reilly. “He was looking into the winter as a very black and long time. His isolation and hopelessness was his concern – he had given up.”

It was “a simple enough intervention” in this case, convincing the man to go to a nearby Men’s Shed, where he would meet others.

“Now he goes once a week; sometimes they get together at the weekend as well,” says O’Reilly. “It is starting to give him hope.”

“That’s the type of cases we come across. Then, sometimes you come across cases where you are too late.”

Provisional figures released this week by the National Office for Suicide Prevention show counties Monaghan and Cavan have the highest suicide rates in the country.

Although the figures have to be treated with caution for a number of reasons – including the number of suicides that go unreported – they suggest there were 17.1 suicides per 100,000 people in Co Monaghan between 2016 and 2018.

That is up from 9.8 a decade ago, although there are variances in the intervening years.

In Co Cavan there were 16.7 suicides per 100,000 over the same period. That figure was the same as it was 10 years ago, again with fluctuations in between.

Both counties are more than double the national average of 8.2 (rates in Dublin range from 2.4 to 4.2) and they appear at odds with the overall countrywide trend.

Suicide is decreasing in Ireland and rates have dropped to their lowest level this century. Since 2009-2011, when the rate was 11.7 per 100,000, it has decreased consistently every year.

Dan Neville, president of the Irish Association of Suicidology and a former TD who campaigned for the decriminalisation of suicide, says the downward trend is “significant”.

“It is rarely I would say something like that, but over that number of years, I think it is significant and welcome,” he says.

Neville says Ireland has “moved a long way” in its discussion around mental health over the past quarter of a century.

Suicide was a criminal act until as recently as 1993.

Neville credits 1998’s national task force report on suicide for starting a national conversation and praises high-profile figures who have opened up in recent years about their own experiences for helping to destigmatise mental health.

There are also many more services available – many of them voluntary – than in previous decades.

Variations between rural and urban areas are always so, he says, as there are more facilities – both health and social – as well as less physical isolation in the cities.

However, Cork city appears to defy this logic. At 15.3 per 100,000, it has Ireland’s third-highest suicide rate. Neville says there can be complex factors affecting local figures, including copy-cat suicides when well-known people take their own lives.

But he warns there is “no acceptable level of suicide” and “no figure we can be complacent about”.

“We are far off from fully destigmatising mental, psychological and emotional difficulties,” he says.

“There is still a level of denial and a level of secrecy within those who suffer and within many of their families, who are slow to accept that somebody might require professional intervention.”

Stigma can be reinforced by some coroners too, he says, as some may be reluctant to record a suicide as such because of sensitivity to the bereaved family.

State funding also remains “inadequate, coming from such a low base” and a “considerable amount of investment” is needed, especially in child and adolescence psychiatry, “where we know that early intervention has a high chance of cure, never to return, while a late intervention can become a difficulty for life”.

Consultant psychiatrist Veronica O’Keane says there has been a “big shift in male culture” and increased awareness of mental health issues, which has coincided with the sliding suicide rates.

But she believes there needs to be more focus on social – rather than geographic – pockets with higher rates, including those living in deprived areas, and Travellers.

“Suicide is very rare,” she says.

“When you look at the rates in Monaghan or Cavan, an additional one or two suicides will greatly change that rate. So you need to look at areas where there is population. Dublin is more representative of what is happening in Ireland generally.”

There also needs to be more focus on older people, she adds.

“Everybody says there is an explosion of suicide among young people. That is actually not true. That is not to diminish any single death that has occurred, but in fact it is our middle-aged population who are at the highest risk of killing themselves.”

O’Keane says that although Ireland has become better at talking about improving mental health, there remains a “taboo” around those who are mentally ill and the use of pharmaceuticals to “medically treat” depression.

“There all these anti-psychiatry people who get on the airwaves, and the big question at the end is always ‘Are you still taking the medication?’, as if someone taking medication is a failure in some way,” she says.

“Anti-depressants are effective. We see them as a good thing, not a failure,” she adds.“It may be controversial among some in the non-scientific community, but it is an absolute fact among the medical community, and we think they are not being used enough.”

Back in Cavan, O’Reilly says more public money is needed to get “people on the ground” to combat what, he says, in an epidemic of isolation in rural Ireland, as people move away, post offices shut, pubs close down and a way of life wanes.