DUP heaps pressure on Theresa May despite confidence-and-supply deal 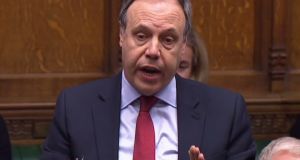 Nigel Dodds said the advice of the British attorney general Geoffrey Cox QC “vindicates the DUP opposition to the backstop” and was “devastating for the prime minister”. Photograph: AFP/Getty Images

DUP MPs continue to line up against the British prime minister notwithstanding the party’s assertion that the confidence and supply agreement to prop up Theresa May’s government remains in place.

As Mrs May struggles to gain support for the EU-UK withdrawal agreement ahead of Tuesday’s crucial vote, DUP MPs such as deputy leader Nigel Dodds and East Derry representative Gregory Campbell reasserted their opposition to the proposed backstop.

While the party insists the confidence-and-supply agreement still was operable, the DUP nonetheless was among the range of parties in the House of Commons that voted against the British government to ensure that the legal advice on the backstop was published.

Mr Dodds said the advice of the British attorney general Geoffrey Cox QC “vindicates the DUP opposition to the backstop” and was “devastating for the prime minister”.

He said the backstop was “totally unacceptable and economically mad in that it will be erecting internal economic and trade barriers within the United Kingdom”.

Mr Dodds said on Wednesday that the legal advice “demonstrates how the prime minister has failed to abide by the commitments she gave in that the United Kingdom as a whole would leave the European Union and that she would ensure there would be no customs or regulatory divergence within the United Kingdom”.

His colleague Mr Campbell meanwhile told the House of Commons on Wednesday that the notion of a hard border was a “negotiating ploy” by the EU and was a “practical, political, physical impossibility”.

“It is a tragedy that the prime minister permitted this ‘hard border’ narrative to gain traction. The Border couldn’t be hermetically secured during the Troubles when there was over 20,000 soldiers based in Northern Ireland. It would be physically impossible to have a hard border today even if anyone wanted to do it,” he said.

“There is no one to build this so-called ‘hard border’. The Irish Government, British government and the European Union have all clearly committed that they won’t impose one,” added Mr Campbell during prime minister’s questions.

Regardless of the pressure, Mrs May and her cabinet supporters continued to push for acceptance of the Brexit deal.

On Wednesday a group of Northern Ireland business and civic leaders travelled to Westminster to join Northern Secretary Karen Bradley in lobbying MPs in favour of the EU-UK withdrawal agreement.

Among those who pressed the merits of the withdrawal agreement were representatives from Manufacturing NI, the NI Meat Exporters Association, the Freight Transport Association NI, the Ulster Farmers Union, the Confederation of British Industry NI and the Northern Ireland Council for Voluntary Action.

Ahead of the lobbying Ms Bradley’s office noted that Northern Ireland-based companies sold £14.4 billion worth of goods and services to the rest of the UK in 2017, “making a significant contribution to the overall UK economy”.

“I am delighted that so many senior figures from Northern Ireland’s business and civil society have travelled to Westminster to speak to MPs about the Brexit deal we have struck with the EU,” said Ms Bradley.

“The deal sets Northern Ireland and the rest of the UK on course for a better future outside the EU – a globally trading nation, in charge of our own destiny and seizing the opportunities of trade with some of the fastest-growing and most dynamic economies across the world,” she added.

“I hope that once they have heard about the opportunities and risks first hand, MPs will realise that this deal delivers for the whole of the United Kingdom,” said Ms Bradley.