DUP has no objection to the Irish language, says Donaldson 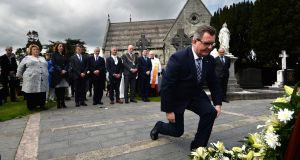 Sir Jeffrey Donaldson lays a wreath at the annual Daniel O’Connell Commemoration at Glasnevin Cemetery which was followed by a forum on Ireland post-Brexit. Photograph: Dara Mac Dónaill

The Irish and British governments were already planning a new initiative to restart all-party talks in Northern Ireland before the murder of journalist Lyra McKee, DUP MP Sir Jeffrey Donaldson has said.

Speaking in Dublin on Sunday, he also said the DUP had no objection to the Irish language and that, historically, Presbyterians, of whom he was one, had kept the language alive when it was failing.

“My difficulty is not with the language. My difficulty is the politicisation of the Irish language by one party in particular. When I hear a representative of that party say that every word spoken in Irish is another bullet fired in the struggle for Irish unity, I get worried about that,” he said.

Sir Jeffrey laid a wreath as he was taking part in a forum in the Glasnevin Museum to discuss the future of Ireland post-Brexit, which coincided with the annual commemoration for Daniel O’Connell.

Panel members were asked if they believed that Brexit would still happen. Sir Jeffrey said the experience of Michael Collins and the treaty negotiations in 1921 showed that “what he achieved and what he set out to achieve didn’t look the same”.

He said he had learned from the Brexit process that “whatever you think you get when you start out, it is never quite what you end up with”.

“I am optimistic that we will find a way of dealing with it in this island that will give us an outcome that we can both live with.”

He was asked if the conciliatory tone he had attempted to strike in Dublin was at odds with some of the rhetoric used by other DUP party members on the subject of Brexit.

“There is nothing that I have said that you won’t see in the DUP manifesto. Tone is important and we are all individuals and we all do things differently. I have made it my business to come here as often as I can because we need to deal with some of the stereotypes because, with due respect to the media, they deal in soundbites not substance.”

Mr Donohoe told the forum he believed the European Union would be “even more relevant and even more important in the decades and centuries that lie ahead of us”.

He said the variety of challenges including climate change and globalisation “makes the European Union more important than ever”.

He also believed there would be no post-Brexit settlement between the EU and the UK “which will in any way diminish the relationship between Ireland and the UK”.

“It will be as indispensable to our shared fortunes as it is now and I say that for reasons of culture, for our shared strategic interest in our stability and our prosperity.

“The relationship will be fundamentally different to the status quo of today, but inside that change all of us have to renew our efforts to make sure that relationship is as close as possible. There is too much at stake for it to be any other way.”