Repeat offenders: ‘Only way to stop people like this is to actually incarcerate them’ 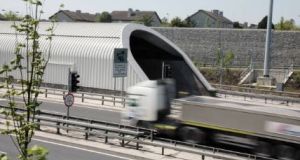 “People who continue to drive while suspended, do face (prison time) in court. And judges are jailing people who have continually broken the law.” File photograph: Getty

Some motorists have such disregard for the law and committed crimes so regularly that jailing them is the only way to stop them, the head of the Road Safety Authority Moyagh Murdock has said.

She added the courts were taking a tougher approach and were jailing the worst offenders.

“The only way to stop people like this is to actually incarcerate them,” she said. “The only way of stopping them driving is when they don’t have access to a vehicle.

“And sadly that’s what we’re seeing in road traffic collisions; a small cohort of drivers are recidivist offenders. And the only way we are going to be able to prevent that is to have them incarcerated at the time.

“People who continue to drive while suspended, do face (prison time) in court. And judges are jailing people who have continually broken the law.”

Ms Murdock made her comments after it emerged only about one in 10 motorists sanctioned with a driving ban had surrendered their licences to the RSA.

However, she added only 45 per cent of the 9,400 drivers suspended in 2017 had a valid driver’s licence at the time they were banned for motoring offences.

Some 60 per cent of unaccompanied learner drivers who had had their vehicles seized, for example, were also breaking other laws at the time, Ms Murdock said. This included having no valid NCT.

Ms Murdock believed the fact many drivers had not surrendered their licences to the RSA must be viewed in the context of “a cohort” of motorists being repeat serious offenders.

“A lot of these people have already disregarded the law, which is what got them in court in the first place,” she said.

However, the important issue regarding suspended driver enforcement was the detection of motorists who were continuing to drive at a time when they should be serving a ban.

The Garda was in the process of introducing smart phones to frontline gardaí which were linked to databases of banned drivers. These would enable gardaí to instantly check whether a driver they encountered on duty was banned or not.

Because that technology has not been available until now, gardaí stopping motorists have had no way to instantly check their legal status.

That has made it very difficult for gardaí to catch already-banned drivers.

While between 9,000 and 10,000 bans were issued each year, there were approximately 20,000 driver suspensions active at any one time in the Republic.

“A third of those people who are disqualified actually had no record of ever having held an Irish licence,” she said on the Marian Finucane show on RTÉ Radio 1, adding a further 22 per cent had allowed their licences to expire.

Ms Murdock pointed out that there was not necessarily a direct relationship between suspended drivers surrendering their licences and compliance with driving bans. Some motorists who surrendered licences to the RSA might still go on to flout their driving ban.

Others who did not surrender their licences might otherwise comply fully with their bans, and not drive for the duration.

While that process was ongoing, the drivers were permitted to continue driving.

Because the law stipulated they must carry their licences at all times when driving, they were permitted to retain their licences, unless and until their cases and any appeals were fully concluded with a driving ban as the outcome.