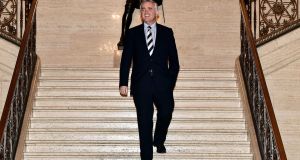 Jonathan Bell claimed a senior civil servant in the Department for the Economy told him that had DUP special advisers not interfered in the RHI scheme, its cost could have been halved. Photograph: Charles McQuillan/Getty Images

The DUP has dismissed a claim that a brother of a party special adviser had a job installing boilers under the controversial Renewable Heat Incentive (RHI) scheme.

The refusal of DUP First Minister Arlene Foster to stand down temporarily while an investigation took place into the scheme led to the collapse of the Stormont Executive and the calling of Assembly elections on March 2nd.

As the Assembly, which is due to be dissolved on Thursday, sought to address the problems created by the scheme, former DUP minister Jonathan Bell used parliamentary privilege on Monday to make allegations against senior DUP special adviser Timothy Johnston.

Mr Bell raised the possibility there were delays in imposing cost controls on the scheme because Mr Johnston has a brother who installs biomass boilers.

The DUP press office issued an emphatic denial of Mr Bell’s claim. “For the avoidance of doubt, Timothy Johnston’s brother does not, nor never has installed boilers, does not work in this sector and has not been involved in any RHI issues whatsoever,” said a DUP spokesman.

He indicated Mr Bell would be sued if he made the claim without the umbrella of parliamentary privilege. “We challenge Mr Bell to produce a shred of evidence outside the chamber,” said the DUP spokesman.

Mr Bell, again using Assembly privilege, claimed some officials within the Department of the Economy had withheld information from him about the RHI scheme. As a former minister for energy, trade, and investment, he said he was legally entitled to have sight of his ministerial papers.

Mr Bell said one of the documents was an email suggesting “DUP party officers interfered” in the RHI scheme. He claimed a senior civil servant in the Department for the Economy told him that had DUP special advisers not interfered in the RHI scheme, its cost could have been halved.

“I have sought from the Department for the Economy and the permanent secretary [Andrew McCormick] all the information that was made available to me as minister. I understood that a minister could see all the stuff that was there before,” he said.

“It is with regret I still haven’t seen the information that was put before me as minister. It has been confirmed by the permanent secretary that there is an email in the system that says DUP party officers interfered in the process,” he said.

A Department for the Economy spokeswoman was last night asked if Dr McCormick wished to reply to Mr Bell. At the time of writing no response was forthcoming.

The Sinn Féin Minister for Finance Máirtín Ó Muilleoir is on Tuesday due to announce details of a judge-led public inquiry into the RHI fiasco. Mr Bell suggested the inquiry would have access to the papers he wished to see.

The Assembly last night endorsed proposals from the Minister for the Economy Simon Hamilton to significantly limit the projected £490 million overspend on the RHI scheme. They have yet to receive the approval of Mr O Muilleoir.

On Wednesday Mr Hamilton is due to publish a list of people who availed of the RHI scheme. There is still some doubt, however, over whether a full list of 2,000 users of the scheme or a more partial list will be published.