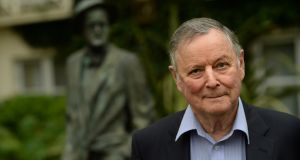 Dundalk Institute of Technology has renamed its library in honour of retired general John de Chastelain, the man who oversaw arms decommissioning in Northern Ireland.

At a ceremony to mark the occasion on Thursday evening, Mr de Chastelain noted the “true architects” of the peace process were the people of the region.

The former chairman of the Independent International Commission on Decommissioning attended the ceremony with his wife, Mary Ann.

In that role, as a part of the peace process mechanics, he oversaw paramilitary weapons being put beyond use – a important aspect of bringing an end to decades of violence.

He was welcomed to Dundalk by Tim O’Connor of the Independent Reporting Commission – which tackles organised crime in Northern Ireland – who thanked him for “removing the darkness of guns from our history”.

However, while Mr de Chastelain’s past role was celebrated, he remains concerned about the status of Northern Ireland 20 years after peace officially arrived.

“My great regret is that more than 20 years after the agreement was brought into effect, there are still those who are seeking to use violence to change what is achieved, particularly when a whole new generation of people who weren’t alive during the Troubles are now voting,” he said in a recent interview with The Irish Times.

He noted in particular the “tragedy” of the recent killing of journalist Lyra McKee in Derry.