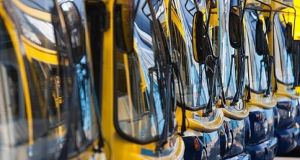 Some 30,000 submissions were received by the NTA in relation to the redesign of the Dublin bus network when public consultation closed at the end of September

Hundreds of Dublin property owners who may lose part of their front gardens to accommodate bus and cycle lanes under the controversial BusConnects project have begun to be notified by the National Transport Authority (NTA).

A public consultation process will open from Wednesday afternoon, and run into early 2019 in relation to upgrading the bus and cycle lanes.

The BusConnects project involves upgrading 16 core bus routes and cycle lanes into the city. The NTA has acknowledged that to achieve the required space it will be necessary to acquire “parts of front gardens and land in front of commercial properties”.

“We will purchase the portion of front gardens from property owners, ensure new landscaping and replanting of the gardens as well as providing compensation for the garden portion loss and disruption,” says the plan.

The NTA has decided to inform affected residents in phases – with the next phase of impacted owners due to be told in January and the last batch notified in February.

It is understood affected residents on the Kimmage to city centre corridor, who have already voiced concerns over the project, will be informed in January.

The NTA has offered one-to-one meetings with those affected, according to a letter seen by The Irish Times.

“We do wish to reiterate that these are proposals only which are not fixed or finalised. They will be published in full shortly to get public feedback in relation to them,” it states.

The NTA also stressed that any decision to proceed with the project would be subject to planning approval from An Bord Pleanála. “That planning application would not be made before 2020,” it says.

Separately some 30,000 submissions were received by the NTA in relation to the redesign of the bus network when public consultation closed at the end of September.

A revised network is due to be published by mid-2019, and a further round of public consultation will begin. The new network is expected to be rolled out by early 2020.

The NTA said the network redesign can be implemented using the current road network with “some upgrades to infrastructure at key interchange locations” and in advance of the core bus corridor project.

1 Coronavirus: Cabinet has not varied strong advice from NPHET on Dublin restrictions
2 Life in Level 3: What will happen under new restrictions in Dublin?
3 Coronavirus: NPHET letter to Government warns of ‘extremely critical juncture’ for Dublin
4 Michael McDowell tells Seanad he has ‘no confidence’ in NPHET
5 Coronavirus: 253 more cases and three further deaths reported in State
Real news has value SUBSCRIBE