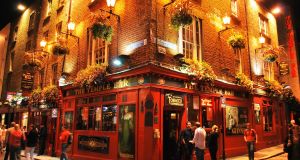 Cost is cited by many respondents as the main barrier to enjoying a night out in Dublin. File photograph: Getty

Normally dear old Dublin is a magnet for millions of overseas visitors keen to explore the city and experience the craic they believe available on every street corner, but Dubliners appear considerably less enamoured by their capital’s charms.

The results of a just-published survey on city nightlife from Dublin City Council suggest that, at best, Dublin is a mid-table mediocrity. Moreover it is far, far adrift of the more alluring European hotspots, Berlin, London and Amsterdam.

According to the council’s latest Your Dublin Your Voice survey, 73 per cent of Dubliners have a negative view of their city’s nightlife and rate it as either “somewhat or very poor”.

In what might be viewed as kicking a city when it’s down, just 13 per cent of the 1,184 people who took part in the survey, ranked Dublin in their top three European cities for nightlife. This leaves it mid-table between Madrid and Prague, although to be fair to those casting the harsh judgment the survey was conducted pre Covid-19,

Almost inevitably money was on the minds of many with cost said to be the main barrier to enjoying a night out in Dublin. All told 41 per cent of people said it was too expensive while infrequent transport options also emerged as an issue.

Dubliners were asked about their engagement in multiple activities at different time slots between 6pm and 6am. And it emerged that the early evening was the only time when there was widespread activity.

What happens after midnight?

The majority indicated that they shop, eat out, go to cafes and exercise between 6pm and 9pm, but after the watershed activity narrows to the pubs while after midnight it becomes confined mainly to dance clubs

With the exception of music-related options there appears to be little demand for other activities after midnight.

The survey indicated considerable support for a night-time manager, someone to co-ordinate nightlife and culture in Dublin, with 70 per cent saying they were “somewhat or strongly” in favour of such a role.

“While priorities following Covid-19 will have changed, the reopening of the city offers an opportunity to innovate and improve on what was available in the evening or at night in Dublin,” said council economist Juliet Passmore. “Previous engagement patterns, highlighted in the survey, suggest that there was strong demand for activities up to 9 pm.”