Varadkar refuses to apologise to Casey as he welcomes Higgins win

Taoiseach: ‘I endorsed President Higgins, my party campaigned for him, he has won’ 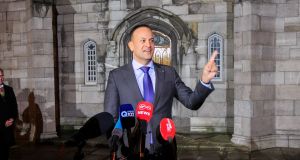 Mr Casey had called on Mr Varadkar to apologise over comments the Taoiseach made urging the public “to send a clear message” at the ballot box.

Arriving at Dublin Castle for the declaration of the results in the Presidential election On Saturday night Mr Varadkar said: “Well I won’t be doing that.”

“Yes a lot of people voted for Mr Casey,” said the Taoiseach, before adding that “we shouldn’t lose sight of the result here. I endorsed President Higgins, my party campaigned for him, he has won by a massive majority on the first count.”

Referring to Mr Higgins’s success as a “ resounding result” and “historic victory”, he said the President had topped the poll “in every single constituency” among “all sections of the community, rural and urban”.

To the echo of laughter Mr Varadkar said it was “highly unlikely” that Mr Casey would now be joining the Fine Gael party.

Mr Varadkar also referred to recent polls which have shown Fine Gael to be 13 points more popular than Fianna Fáil, but said the popularity would not make him call a November election. He said he had refused to call an election in May after the last referendum and “people didn’t believe me. I hope you believe me now.”

While he said “it is of course very encouraging that my party is on 35 per cent and we are ahead in every region, I think every age group and I think in both rural and urban Ireland. But no, I am not planning an election my focus is on getting people’s work done.”

Mr Varadkar said the nature of the Presidency had been evolving since the election of Mary Robinson. “It has become an office that is not in the ownership of political parties. President McAleese, for example, when she sought re-election she sought re-election as an Independent. President Higgins sought it as an Independent today. I think people see the presidency differently to how they saw it in the past. What Fine Gael will do when they consider the presidency is to consider our options. On this occasion we considered our options and we saw we had an incumbent who did an excellent job, he would be overwhelmingly endorsed by the Irish people – and he was.”

He said the Government would also “put proposals to the Irish public” in May that would open the presidential election to Irish citizens no matter where they live. In relation to the length of a presidency he said “a five-year term . . . would be more in line with modern norms than seven-year terms. But again that would require a referendum.”