Dublin Festival of History: JFK, Harry Potter and Nicholas II up for discussion 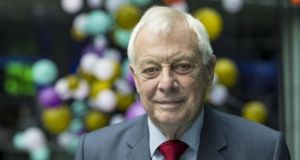 The former governor of Hong Kong and British cabinet minister Chris Patten will be among the speakers at the Dublin Festival of History next month.

Mr Patten, who has also served as an EU commissioner, a chairman of the BBC Trust and chancellor of the Universities of Oxford and Newcastle, will speak about his recently released biography First Confession: A Sort of Memoir in which he writes about his life growing up in a London family of Irish origin.

Mr Harris will talk about his forthcoming novel, Munich, which is a fictional recreation of the fateful meeting between British prime minister Neville Chamberlain and Adolf Hitler at Munich in 1938.

Mr Bell will look at ‘War and the Death of News’ in a discussion with RTÉ’s Keelin Shanley.

Another prominent historian who will participate is Ian Kershaw, arguably the world’s leading authority on Adolf Hitler.

Other events that will take place during the festival include; Dublin Festival of History ‘Question Time’, chaired by broadcaster Joe Duffy; a discussion on ‘Myths, Magic and Historical Parallels in The Harry Potter Books; a look at the history of the GAA and the Irish Revolution; the life and death of Thomas Ashe; a talk on ‘JFK and the Summer of 1963’; a seminar on Henrietta Street and tenement living organised by the new Tenement Museum Dublin; and ‘Dublin in Snapshots’, an illustrated history of Dublin across the centuries.

The Irish Times will be exhibiting the film United Ireland: How Nationalists and Unionists fought together in Flanders in its AV room in Tara Street on on October 12th.

A new family history day will take place on October 7th in Richmond Barracks. Children and families will step back in time and experience the history of Dublin city from medieval times up to the 1940s, through re-enactments, arts and crafts, vintage vehicles and music. All events are free and no booking is required.

Separately, a new bust of the 1798 rebellion leader Henry Joy McCracken has been unveiled to mark the 250th anniversary of his death.

The bronze bust is by the Monaghan-based artist Yoram Drori and was unveiled at Kilmainham Gaol by Robert Ballagh on Thursday night.

McCracken was one of the first prominent political prisoners to be incarcerated in the jail which opened in 1796.

He was from a well-off Belfast Presbyterian family. During the 1798 rebellion, he tried to stage an uprising in Antrim, but failed.

The bust was commissioned by the Kilmainham and Inchicore Heritage Society.

Its secretary Michael O’Flanagan said the Office of Public Works has not given permission for the bust to be permanently located in the Gaol so the society is looking for a permanent home for it.

For more information on the festival visit: www.dublinfestivalofhistory.ie