The Coronas: We wish we were called The Vaccines instead 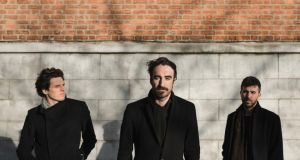 Fate sometimes seems to conspire against you. Witness The Coronas’ dilemma. The chart-topping Irish rock group are suddenly the most feared band on the planet – and having to field urgent questions about whether they’re a hoax.

“We’re not a hoax,” says Danny O’Reilly, their singer. “And it’s definitely not our fault. We started to get WhatsApps and memes in January, maybe even December. We’d normally want to poke fun at ourselves, but because it was such a developing, serious issue we couldn’t really mention it. For a while I was worried about its effect on the band and then feeling guilty for that being my main worry when it’s such a serious thing wreaking havoc on the world.”

This was set to be a breakout year for The Coronas, with their sixth album, True Love Waits, poised to capitalise on their 2017 No 1, Trust the Wire, and billow-pop singles such as Find the Water promising to break them outside Ireland. Enter their viral namesake. When their touring plans were cut short in Dubai, the first thing they did while isolating back home was tweet Corona beer for advice. “We thought, Let’s ask Corona what their plan is,” says O’Reilly. “I’ve heard different things about whether it’s helping or hindering them.”

Did the more confused quarters of the internet turn against them? “In general we’ve had nothing but support, but you’ve got to tip your hat to the funny ones. We headlined the Trinity Ball last summer, and this guy who clearly doesn’t like us tweeted: ‘If Covid cancels the Trinity Ball that’s two years in a row it’s been ruined by the Coronas.’”

As the pandemic shut down live music globally, they were forced to cancel festival appearances, postpone tours of the UK, Europe and the US and delay their album until July. But, like many bands keen not to lose momentum, they’re formulating ways to get out to their adoring, if safely spaced, public. “We’re looking at everything right down to possibly taking over a drive-in cinema, doing smaller theatres with social distancing or a residency in a small venue in Dublin.”

When the Covid-19 restrictions are finally eased, will The Coronas’ tour be a symbolic triumph? “I hope that people make a connection that’s positive,” says O’Reilly. “The Government released a poster image about when they’re going to ease out of the phases, and we’re talking about using that same poster – phase one: single release, phase two: album and the dates.”

Until then, O’Reilly admits, they’d love a more optimistic name. “I’d swap The Coronas with The Vaccines.” – Guardian