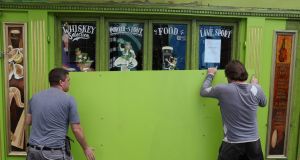 The social solidarity of the spring is fraying. The tentative hopefulness of the summer has given way to widespread resignation. A second wave of Covid-19 is already upon us. With winter approaching, we have a rising infection rate, increasing hospital admissions, warnings of limited critical care capacity and daily recriminations over Government restrictions.

On Friday it was confirmed that stringent restrictions are to be imposed in Dublin, the engine of the national economy and home to more than a quarter of the population. Some of the most difficult aspects of the previous national lockdown, such as school closures and the curtailment of health services, have been avoided but that will be of little consolation to the restaurant staff who are now again without work, the children who can no longer play hurling matches and the families who are once again separated by the ban on non-essential travel to and from the capital.

The decision to move Dublin to Level 3 restrictions is justified. The alarming spread of the disease in the city and county is at risk of spiralling out of control. If three weeks of added restrictions can help to break the chain of transmission, that will save lives and help avert an even stricter shutdown. Yet the Government’s handling of the situation in Dublin raises yet more questions about the coherence of its approach.

When it published its five-level plan this week, the Government placed Dublin halfway between Levels 2 and 3. Now the capital appears to be somewhere around 3.5. Flexibility is important, but this appears to suggest that the five-level system is too rigid for the sort of adjustments public health officials wish to make in their containment efforts. Nor is it clear why these restrictions are being introduced only now, when NPHET raised urgent concerns about the situation in Dublin more than a week ago. If the delay is attributable to the new layers of bureaucracy introduced last week, that points to a serious problem.

On the face of it, the closure of restaurants is counter-intuitive given the low number of outbreaks linked to restaurants here. Not until more than 24 hours after the news emerged was any serious explanation forthcoming, with Prof Philip Nolan clarifying that sites of infection in the community were generally not known but that they must be occurring in places where people gather. That’s a reasonable explanation but it, in turn, raises another question: should we not be investing in the type of tracing and research that would identify community transmission trends so as to enable us to make more rigorous decisions about where infections occur and where they do not?

The Government’s strategy is largely about where, how and when to impose restrictions. But if people are to have any hope, and if businesses are to see any possibility of recovery, they need to know what the plan is to get us back to Level 1.