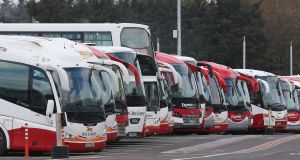 Empty buses at the Broadstone Depot in Dublin during the Bus Éireann strike. Earlier this month members of Siptu voted by 67 per cent to 33 per cent in favour of taking industrial action in support of colleagues in Bus Éireann. Photograph: Niall Carson/PA Wire

Dublin Bus is likely to take legal action to prevent any future sympathy strikes that may take place to support workers in Bus Éireann in the event of the recent dispute in the company flaring up again.

Management at Dublin Bus has told members of the company’s board in advance of a meeting this week that its legal advice is that any such industrial action in support of Bus Éireann staff was likely to be unlawful.

Earlier this month members of Siptu voted by 67 per cent to 33 per cent in favour of taking industrial action in support of colleagues in Bus Éireann, which forms part of the broader State-owned CIE transport group.

Bus Éireann workers are currently considering Labour Court proposals aimed at addressing the serious financial situation at the company which brought to an end a three-week strike earlier this month.

Unions representing staff at the company are expected to ballot members in the weeks ahead.

In a presentation to its board this week, management of Dublin Bus said that while Siptu had announced it had received a majority mandate in favour of industrial action in support of and in sympathy with colleagues in Bus Éireann, it had not been formally notified and no notice of action had been served.

“Following legal advice the board are advised that such action, were it to take place, would in all likelihood be deemed illegal.”

Dublin Bus said it would “utilise all legal recourse” available to prevent such action taking place in the event of it receiving any strike notice.

Dublin Bus declined to comment on the issue on Tuesday.

Meanwhile, the National Bus and Rail Union (NBRU) has criticised delays on the part of Bus Éireann in publishing staff rosters to apply in the event of the changes proposed in the Labour Court recommendation coming into effect.

It said the proposed rosters would be “vital” to members making up their minds on the proposals.

The NBRU said it would be “inconceivable that drivers would be asked to ballot on the Labour Court proposals in the absence of sight of the rosters that they will be expected to operate within the regime recommended by the Labour Court”.

A spokeswoman for Bus Éireann said: “Bus Éireann have agreed to provide clarifications to trade unions pertaining to any matters in the Labour Court recommendation.

“The company are not aware of any delays to balloting, and we will endeavour to provide any clarifications at the earliest possible opportunity.”