Up to 11 stations had coldest summer in five years, says Met Éireann in seasonal report 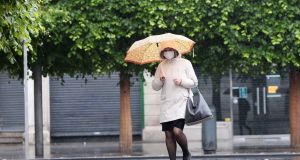 A woman shelters from the rain on Dublin’s O’Connell Street in June. Photograph: Brian Lawless/PA Wire

Dublin Airport recorded its dullest summer on record this year, according to the national forecaster, following on from its sunniest spring earlier this year.

Met Éireann released its summer 2020 climate statement, which described the past three months as “wet and dull with a stormy finish”.

From a relatively dry beginning, June had two intense thunderstorm outbreaks, between the 13th and 16th and on the 25th and 26th, when warm humid air was drawn up from the southeast over the country.

Strong air currents, known as the jet stream, were most active near Ireland in the final third of the month with Atlantic low-pressure systems bringing rain or showers on most days.

The jet stream weakened for a while after the first week of August, which brought some dry pleasant days, but slow moving fronts and thundery continental low-pressure systems kept it mostly cloudy with heavy rain at times.

The final third of August brought two named storms – Storm Ellen and Storm Francis – over the country with widespread gales and heavy rain causing some flooding.

Sunshine levels were below their monthly long-term average (LTA) for the season in all locations.

The Casement Aerodrome, Co Dublin, had its dullest summer since 1987 when it recorded 361.2 hours of sunshine, 78 per cent of its LTA. Meanwhile, Cork Airport had the highest seasonal sunshine total at 89 per cent of its LTA, representing 451.2 hours.

The highest number of daily sunshine hours recorded this season was on June 1st with 15.6 hours of sun at Johnstown Castle, Co Wexford.

The number of dull days ranged from 15 days at Johnstown Castle, Co Wexford to 30 days at Valentia Observatory, Co Kerry.

Dublin Airport recorded 22 dull days. Following its sunniest spring on record this year, Dublin Airport had its dullest summer since records began 78 years ago, with just 331.4 hours of sunshine.

Rainfall totals across the country were above their LTA for the season.

Up to 11 stations had their coldest summer in the last five years, with the majority of mean air temperatures across the country were below their LTA for the season.

The season’s highest temperature was reported on June 1st at Newport, Co Mayo with a temperature of 27.1 degrees.