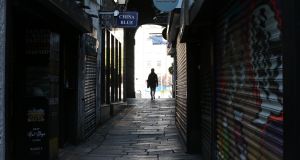 Repeated lockdowns will shrink the economy to the extent it cannot pay for the social goods tax revenues purchase for us. Photograph: Stephen Collins/Collins

It is a truth universally acknowledged that a politician in possession of a good fortune, must be in want of something to spend it on.

It’s the first duty of any government to provide for these things; but right beside it is the duty not to bankrupt the country while providing them.

In the fuss over the second lockdown this week, many people will have missed the fact that a third lockdown is being mooted for January

At present, there appear to be no financial constraints on the Government. The decision to lockdown was made in the full knowledge that any and all costs would be met by further borrowing, and the Department of Finance duly announced that it would borrow an extra billion and a half euro to pay for shuttered businesses, lost taxes, disappeared wages. A billion here, a billion there; pretty soon you’re talking real money.

As has been argued hereabouts before, extensive deficit spending is both the economic and socially responsible thing to do this year as the pandemic rages. Can you imagine what our society would look like without it? But we would be mad to assume that this can continue untrammelled into the future.

Government without financial constraints won’t be good government for long. The truth is that options will narrow. Politicians will have to start paying more attention to the economic costs, as well as the health costs.

In the fuss over the second lockdown this week, many people will have missed the fact that a third lockdown is being mooted for January to deal with the hangover from the month-long Christmas hooley that will inevitably ensue when the current restrictions lapse on December 1st.

Here’s the Taoiseach in the Dáil: “Nphet informed us on Saturday that if we work with this for six weeks, we can get to a position, hopefully by the beginning of December, where we can reopen but that, in the new year, we might have to consider more restrictions again to keep control of the virus until we get hold of a vaccine.”

You’ll notice who is in charge here.

Currently, the obsession in and outside the Government is centred on one number: the R rate

That was confirmed when Prof Philip Nolan, whose scarifying projections of spiralling infections, overrun hospitals and escalating deaths have done much to force the massive U-turn by the Government, told RTÉ, “If, following December and January, we find levels of cases rising and in particular rising quickly we may need to intervene again.”

But can we really adopt this model of lockdown-liberation-lockdown just like that?

Leave aside the mental stress, the private anguish and the stunted lives that the isolation is bringing to people all over the country (though that may well be its greatest impact), repeated lockdowns will shrink the economy to the extent that it cannot pay for the social goods tax revenues purchase for us.

Senior politicians and officials who spoke privately last week all agree that there is a case for lockdowns to get infections under control.

Mind you, many of them wonder if the numbers really are currently out of control though, pointing to the daily cases that are currently trundling along, rather than escalating alarmingly, and the continuing low level of deaths. They point to the difference between the Nphet requirement that the “R” number (the number of infections caused by each individual case) should be at 0.5 for several weeks and the Government requirement that it be under 1 and ask: who’s in charge here?

(One senior official has taken to reminding Ministers: “Youse are the Government.”) They ask why the ban on home visits – said to be main cause of the recent spike – wasn’t given a chance to work last week.

But above all this, what they nearly all worry about is the idea that we can continue to shut down the economy and society on a semi-regular basis.

Currently, the obsession in and outside the Government is centred on one number: the R rate, which will decide whether the virus is spreading or receding. A decade ago, as Ireland slid towards a bailout, we were fixated on another number: the bond yield – the interest rate the Irish government had to pay to get people to lend it money. Remember that? As the rate became unaffordable, the bailout became inevitable.

Of course, the fiscal orthodoxy has changed from a decade ago, and the landscape for sovereign debt is unrecognisable from what it was. Because of decisions taken by central banks – and partly too because the public finances here were rebuilt by the last two governments – the Government can now borrow more cheaply than ever.

But if it’s true – and I think it is – that central banks won’t stand over a position where governments can keep running big deficits indefinitely, then that means the present accommodating stance will be pulled back at some point. In other words, the world will change. Bond yields will start to matter again.

That means that regular ritual blood sacrifice of the Irish economy cannot continue. We will have to find a way of living with the pandemic that doesn’t involve the shutdowns. Perhaps someone might spend the next few weeks thinking about that.

1 Bloomberg ranks New Zealand top in fight against Covid-19 - but how did Ireland fare?
2 Covid-19: Museums, cinemas, hairdressers expected to reopen next week
3 Coronavirus: 226 new cases and 6 further deaths reported in the State
4 The beginning of the end: 10 things to know about Covid-19 vaccines
5 Alison Curtis: My guilt at not going for a second pregnancy
Real news has value SUBSCRIBE