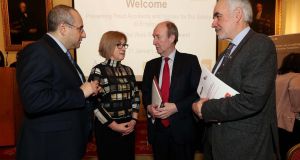 Driving for work accounts for about one in three road collisions in the State every year, with the so-called “gig economy” and people using their own vehicles now contributing to the figures, a conference has heard.

The Driving for Work Risk Management event in Dublin on Thursday was organised by the European Transport Safety Council (ETSC), the Road Safety Authority (RSA), the Health & Safety Authority (HSA) and An Garda Síochána.

RSA chief executive Moyagh Murdock said employers had a duty of care to keep their employees safe while driving for work.

“Driving for work is a high-risk activity. It is estimated that driving for work accounts for involvement in one in three road collisions every year. While drivers are responsible for how they drive, employers have duties in helping to make driving for work safer,” she said.

Ms Murdock said employers should adopt procurement strategies to acquire the safest vehicles on the road. She urged State agencies to “lead by example” and to adopt the five-star European New Car Assessment Programme (Euro NCAP) safety rating for vehicles as standard.

“As procurers of services we need to ensure that road safety is a key consideration in the awarding and selection of any contracts. If you do outsource contracts remember that you cannot outsource your responsibility to road safety,” she added.

Eighteen out of 40 work-related fatalities last year were vehicle related and those who died were mostly men. Thirteen of those 18 were workers and five were non-workers, while 13 of the incidents happened in the workplace and five occurred on a public road.

Of the 915 road traffic fatalities in the State between 2008 and 2011, analysis suggested some 23 per cent of them were work related, Prof Drummond said. This would probably rise to about 34 per cent if commuting were included, she said.

Prof Drummond also said the so-called “gig economy” where people were not directly employed but rather using their own transport, including bicycles and motorbikes, was also contributing to work-related incidents.

Opening the conference, Minister for Transport Shane Ross said 458 people had died on the roads in 1998, before a new strategic approach to reduce the “appalling” total number of road deaths each year.

Last year, the total was 150. He said, however, that there was “no such thing as success” in relation to road safety and there was always room for improvement.

Mr Ross said it was a “poignant day”, on which the funerals were taking place of four friends who died in a road crash in Donegal on Sunday. A minute’s silence was held in their memory.