Thursday night will be the coldest night of the week as temperatures plunge to as low as -6C in parts of the country. Met Éireann has issued a status yellow snow and ice which remains in place until noon on Saturday. Video: Melissa Trant 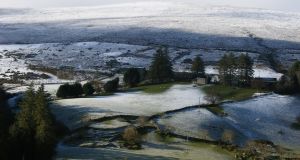 A light dusting of snow on the Dublin mountains on Wednesday afternoon. Photograph: Stephen Collins/Collins Photos 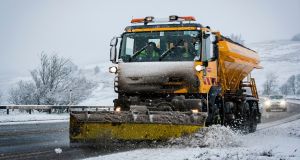 A gritter on the Glenshane Pass in Co Derry. File photograph: Liam McBurney/PA

A status yellow snow and ice warning issued for the coming days was updated on Thursday morning and is now in place until noon on Sunday.

The forecaster said it will be very cold until Sunday, with severe frosts at night and ice on untreated surfaces.

In its national forecast, Met Éireann said rain in the west and southwest would gradually extend to other areas on Thursday, turning heavy and persistent, especially in southern counties. The rain was to turn to sleet and snow for a time over parts of Connacht, Leinster and inland Munster.

The forecast for Thursday night stated: “Extremely cold . . . overnight with brisk northeasterlies and further wintry falls, mainly in the south and east.”

It said that snow will occur on high ground, and possibly on some lower ground, especially inland.

The airport is fully operational this morning. Our snow teams are working hard through persistent heavy snowfall throughout the morning to keep the runway clear. with snowfall expected throughout the day psssengers are advised to contact their airline for the latest flight info pic.twitter.com/wfk8NGAe8F

Frost and icy conditions can be expected too, resulting in “treacherous conditions”.

The forecaster said lowest temperatures overnight would be between -2 to -5 degrees Celsius, and it would be coldest across Ulster and west Connacht.

AA Roadwatch warned motorists that it takes “up to 10 times longer” to stop on an icy road. It urged drivers to slow down in affected areas, to keep a greater distance from the vehicle in front and to keep all driving manoeuvres gentle.

The forecaster said conditions would feel “raw” for the rest of the week.

Friday is set to be a very cold day, with moderate north or northeast breezes bringing some wintry showers to exposed coastal areas, mainly in the north and east. Most areas will be dry with spells of winter sunshine. Met Éireann says there will very little in the way of a thaw and top temperatures will range from 2 to 5 degrees.

It will be extremely cold overnight on Friday, with a severe frost and icy conditions. There will be lows of -2 to -5 degrees generally, but this will be lower over snow fields. Many places will be dry, though there will be a few wintry showers.

Saturday will bring some bright, sunny weather with wintry showers in coastal areas. Temperatures will reach between 3 and 6 degrees in the afternoon but are due to drop to -5 degrees overnight with severe frost, while icy roads and freezing fog can also be expected. However, rain will come in from the Atlantic later on and temperatures may rise.

Frost, fog and ice will gradually clear on Sunday morning, with some sunny spells. All areas will see some rain for a time, with the possibility of sleet in northern areas. Highest temperatures will be between 5 and 9 degrees.

The Dublin Region Homeless Executive (DRHE) activated its Extreme Weather Protocol for people sleeping rough. It urged members of the public to alert Dublin’s Housing First service if they had information on rough sleepers (https://www.homelessdublin.ie/report-rough-sleeper).

The DRHE, which co-ordinates the homeless services of all four of the capital’s local authorities, said extra contingency beds are ready for use for the duration of the alert.