Donegal crash: ‘There is no greater weight than the coffin of your son, brother or friend’ 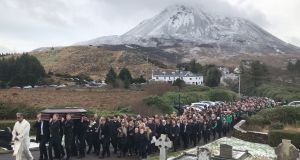 “Briste agus bruite,” were the words chosen by Fr Sean O Gallchoir to reflect the feeling of this north-west Donegal Gaeltacht community which had just lost four of its young men to another unspeakable car crash in the county.

You didn’t need to be a Gaeilgeoir to understand “briste agus bruite”; the words carried their own onomatopoeic resonance.

“Broken and crushed,” – it was a phrase that captured the mood of the four grieving families and the grieving community in this stunningly beautiful part of Ireland.

It was a day of raw, piercing cold and a day of rawer emotion in these three Donegal parishes of Gortahork, Dunlewey and Falcarragh just 8 miles apart under the Derryreagh Mountains. It started at 10am in the Christ the King Church in Gortahork for the funeral of 23-year-old Shaun Harkin and concluded with the 2.30pm funeral Mass in the same church for 24-year-old Daniel Scott, who both lived in or close to the village.

Each funeral was held 90 minutes apart so relatives and friends of the four young men could attend all services. At the first two Masses most of the services were in Irish; the latter two mostly in English.

At 11.30am mourners travelled to Dunlewey for the funeral of local man Micheál Roarty, (24) in the beautiful old round-towered Sacred Heart Church close to snow-clad Mount Errigal whose saddle peak was covered in a snow cloud.

And then to St Finian’s Church in Falcarragh for the 1pm funeral Mass for 24-year-old John Harley from the town, and then back to Gortahork.

It was a long, cold, cruel day of grief, mourning and remembrance.

For some reason Donegal is viewed as almost synonymous with such tragedies. The four young friends died instantly on Sunday night when the Toyota Corolla in which they were travelling crashed in the townland of Glenhola about four miles from Gortahork.

In the past nine years there have been eleven collisions in the county in which more than one person was killed, the worst in 2010 when a crash in Inishowen claimed the lives of eight men, seven of them aged between 19 and 23.

Sensitivity was applied throughout the day but equally the parish priest of Gortahork, Fr O Gallchoir did not shy away from expressing important messages. At the funeral of Shaun Harkin he reminded mourners that drivers took on a “great responsibility” when they got into a car.

At the funeral of Daniel Scott he repeated his advice. He told the congregation that “the car, as we can see, is a lethal weapon”. “Drive with care, drive with attention, drive safely so that no harm will befall anybody,” he urged.

But mostly the day was about providing comfort and solidarity to the families and helping the community begin coming to terms with the tragedy through kind and wise words, and through putting character, humanity and personality to the four victims.

Shaun Harkin was described as “wise beyond his young years” and full of conversation and fun; Micheal Roarty as “noble, humane and social” and a bit of a “rascal” too; John Harley as a “solid man, an all round nice guy”; and Daniel Scott as a “dapper dresser and man of style” who loved his blue suede shoes and whose final selfie was of his new hair style and carrying the caption, “new hair, don’t care”.

And, as in all such communities, sport was a vital part of the lives of the four men. There were guards of honour at the churches with mourners, depending on the particular parish, wearing the jerseys of Dunlewey Celtic and Glenea United soccer teams and of the Cloughaneely and Gaoth Dobhair GAA football teams.

Gaoth Dobhair play Corofin in the semi final of the all-Ireland club championship on February 16th and it was likely that all four would have been joining thousands more from the county at the match in Carrick-on-Shannon.

Sure to have been at the head of the queue for tickets was Micheal Roarty, a member of the Gaoth Dobhair club. At his funeral under Mount Errigal three senior members of the club carried the league, county and Ulster cups that Gaoth Dobhair won in the past year. The green jersey of the club was placed on the coffin at the doorway of the church in Dunlewey.

The officiating priest, Fr Brian O Fearraigh called on the hundreds of young people present to keep living life to the full in memory and in honour of Micheal Roarty whose nickname was Roycee. Those left behind had to “continue playing until the final whistle – I am sure Roycee will be sitting on the sideline waiting for you”.

Another accomplished sportsman was John Harley from Falcarragh who played Gaelic football for Cloughaneely and soccer for Glenea United. The officiating priest Fr James Gillespie noted however that he was dedicated more to the games than the training. His response when pulled up for missing some sessions was “training is only for those who need to improve”.

So, as on all such occasions, there was some levity to help people in their heartbreak and sorrow, but the emphasis, of course, was on how devastating was the tragedy for the families, for their friends and for the community.

“We are all swamped by sorrow and grief,” said Fr O Gallchoir, “but at the same time we are engulfed by love and support which has been so evident in the past week, and we are sustained by that love and support.”

It was a day too when four coffins over several hours were shouldered into three neighbouring churches. Perhaps on a day of strong words, Fr O Fearraigh reflected it best.

“There is no greater weight than the coffin of your son, your brother or your friend on your shoulders,” he said.