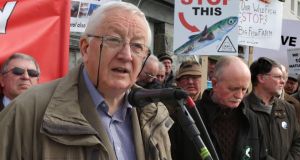 Niall Greene of Salmon Watch Ireland: there is general consensus that the impact of those factors over which man has some direct influence should be addressed with “some urgency”. Photograph: Joe O’Shaughnessy.

Ten years after Ireland banned driftnetting for salmon at sea, the controversial measure has proved to be a failure.

Speaking at the annual Salmon Watch Ireland conference in Galway, Dr Byrne said marine survival of the species had fallen from 20 per cent of fish returning to rivers in 1980 to five per cent today, before any exploitation.

The non-governmental organisation is dedicated to “restoration of wild Atlantic salmon abundance”.

Angling now accounts for 63 per cent of salmon catches since 2007, the year when the driftnet ban sought by the European Commission in 2006 came into force. Inshore commercial fishermen were offered €25 million in compensation to quit, though not all licence-holders participated.

A Government advisory group had warned that the salmon population would fall to “catastrophic” levels if drift-net fishing was not banned immediately.

However, the population has fallen anyway, and Dr Byrne pointed to a series of causal factors in the marine environment, including by-catch on the high seas, climate change influence on ocean temperatures, and the impact of fish farming.

Within river systems, far more work was required to improve water quality, and there was also wildlife predation of salmon, with “more cormorants than we have ever had and seals in estuaries”, he said.

Research conducted by former Marine Institute scientist Dr Ken Whelan for the EU Salsea project found that climate change was contributing to an “alarming” increase in the numbers of wild salmon dying at sea, and that the stock was moving north in response to a warming ocean.

The project found salmon were feeding at the very edge of frozen polar ice fields – sometimes at depths normally inhabited by the sperm whale of up to 800 metres.

Dr Whelan warned that Ireland was among a group of “southern stock states” where the wild salmon was threatened with extinction if high mortality at sea continues.

Opening the conference on Saturday, Minister of State with responsibility for inland fisheries Seán Kyne said he favoured a closer look at land-based fish farms. He said this “could be explored” as part of a review of aquaculture licensing which Minister for Marine Michael Creed has recently established.

Salmon Watch Ireland chair Niall Greene said while the causes of wild salmon decline were multiple, there was a general consensus among those concerned with salmon conservation that the impact of those factors over which man has some direct influence – including water quality, exploitation, by-catch at sea, the impact of salmon farms – needed to be addressed with “some urgency”.

Land-based fish farming was proving to be viable for economic high quality farmed salmon, but the open-cage industry was not going to make this transition overnight, and better regulation was “vital”, he said.

Salmon conservationists, including anglers, and fish farmers, have more in common than divides them, Dr Liam Carr of NUI Galway (NUIG) said.

A recent stakeholder consultation which Dr Carr undertook for NUIG’s Whitaker Institute found that there was broad agreement that aquaculture licensing required updating and that regulatory oversight improved transparency.

He found “cross-group” agreement that salmon farming threatened the environment, and that infestations of sea lice had a negative impact on wild salmon and sea trout.

Ireland is a small player in fish farming, producing 12,000 tonnes annually over 24 farms, but aquaculture has been cited as a growth area, with government estimates suggesting a 78 per cent increase in farmed salmon production by 2020.