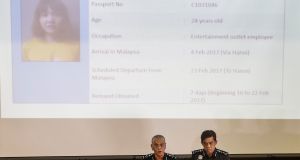 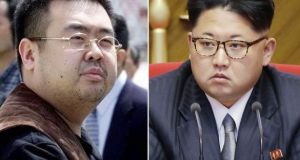 Malaysian police are seeking four North Koreans who they believe engineered the assassination of North Korean leader Kim Jong-un’s estranged half-brother Kim Jong-nam. However they say the suspects fled the country on the day of the killing.

Kim Jong-nam died last Monday after two women splashed his face with quick-acting poison at Kuala Lumpur International Airport where he was about to catch a flight to Macau, the small former Portuguese gambling enclave where he has been living for some years.

Malaysian police arrested a North Korean man on Friday. A Vietnamese woman, an Indonesian woman and a Malaysian man have also been arrested.

The mother of the Indonesian women, Siti Aishah, said her daughter was duped into believing she was part of a TV show or advertisement.

South Korean intelligence believes North Korean agents were behind what they say was an assassination, especially after North Korean diplomats tried to prevent Malaysian officials carrying out an autopsy.

“We believe the North Korean regime is behind this incident considering five suspects are North Koreans,” Jeong Joon-hee, a spokesman at the South Korean unification ministry, which deals with inter-Korea affairs, told a briefing on Sunday.

Kim Jong-nam is the elder brother of Kim Jong-un, but was passed over for the leadership after his father Kim Jong-il’s death following an attempt to visit Disneyland in Japan on a false passport.

However, his legitimate claim to the leadership and his criticism of dynastic rule in North Korea made him a target, despite the fact that he was supposedly protected by China.

Malaysian police were now co-ordinating with international agencies to find the four other North Korean suspects.

“Next plan is to get them. We of course have international cooperation especially with Interpol, bilateral involvement with the country involved, we will go through those avenues to get the people involved,” deputy inspector-general of police Noor Rashid Ismail told reporters at a press conference in Kuala Lumpur.

Police said that they still could not officially confirm that the deceased was indeed the half brother of North Korean leader Kim Jong-un.

“We need the next-of-kin to come forward and verify his identity. Police also have to base our assessments on scientific evidence (DNA tests) to confirm,” he said.

North Korea has said it would reject Malaysia’s autopsy report and accused Malaysia of “colluding with outside forces,” which is code for South Korea.

The assassination of Mr Kim, even though he was believed to be under Chinese protection, is seen as a sign of a growing strain in relations between old allies Pyongyang and Beijing, exacerbated by the North’s nuclear programme which China resents as it brings global attention to its borders.

The Chinese commerce ministry said the decision was in line with United Nations’ sanction against North Korea. Coal is reckoned to account for up to 40 per cent of North Korea exports to China.

There was an existing ban on coal imports which allowed exceptions for coal intended for household use, which led to criticism about the effectiveness of the embargo.