Covid-19 crisis has shown there is a desire for open, honest and competent government 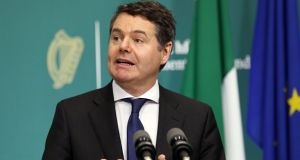 We have witnessed a moment of exceptional national unity in recent weeks. But that will give way – as it must – in the coming weeks as the economic, political and social forces which have always shaped politics and life here and elsewhere reassert themselves.

The country will be changed by the extraordinary experience of the virus and the lockdown, for sure; hopefully, we will learn some important things, and make some far-reaching changes. How the public and politicians deal with the changes wrought by the crisis will be the story of our politics for the foreseeable future.

The crisis will certainly leave us with a larger state. So one of the first questions in the post-Covid era will be (though actually it will not wait that long) will be: how do we pay for it?

If people do not see the point of the EU, they will vote for leaders who agree with them, like Marine Le Pen. And if that happens, the jig is up, lads

That is the point at which political differences reassert themselves – as they should; different people and parties have different ideas about how much the state should do, and how it should be paid for. That’s the essence of politics.

Actually this is two questions, as there are two sets of corona costs: the immediate costs of dealing with the crisis, and longer term costs of running a larger state.

Europe will help with the first bit – at last. The breakthrough at the European finance ministers’ meeting on Thursday night was perhaps the most important event of the week, clearing the way for help for the countries which most need it, underwritten by the strength of the union as a whole.

But the deal – and the division that preceded it – underscored the fundamental and as yet unreconciled differences that continue at the heart of the European Union – differences that may yet be its undoing.

If the EU can’t help solve these sorts of problems, it will sooner or later cease to exist: because nobody will see the point of it. And if people do not see the point of it, they will vote for leaders who agree with them, like Marine Le Pen. And if that happens, the jig is up, lads.

For now, the intervention of Europe’s indispensable moral and political leader Angela Merkel – due to retire soon, remember – seems to have swung the momentum in favour of agreement. But I think to stand by in the face of such a crisis would mean the EU is flirting with disaster.

It remains one the characteristics of the EU that it requires a desperate situation to get it to act; and even then it’s touch and go. As Winston Churchill said of the United States, it will always do the right thing, but only after it has tried everything else.

The other aspect of the costs of the coronavirus – the legacy of a larger state, in healthcare, in social protection, in market intervention: that we will have to pay for ourselves. This will be the central challenge facing the next government, if it ever gets formed.

In this regard, I cannot understand the commitment to avoid “austerity” by the leaders of Fine Gael and Fianna Fáil as the basis for their emerging new partnership. The public finances will have to be brought into balance over the coming years. If the state is larger (and it will be) and therefore more expensive, that will require greater resources to run it.

So the revenues gathered by that state will have to increase, while costs will have to be reduced – or at least controlled – in some areas of its activities. In plain English, there will be tax increases in some areas, and spending cuts in others. Long-promised capital projects will be long-fingered.

No matter how the next government goes about this, it will be characterised as austerity by their opponents, and the commitment blithely made in recent weeks will be thrown back at them played and replayed a million times. They have made a rod for their own backs.

“Of course there will have to be tax increases,” mutters one senior official. Several of his colleagues grumble their agreement. Others ruefully ponder the prospect of public-sector pay cuts.

Things have to be paid for, shrugs one mandarin. These are inevitable choices facing any government. I suspect that Minister for Finance Paschal Donohoe and Fianna Fáil finance spokesman Michael McGrath – likely the finance-public expenditure axis of the next government, and as such the guys to whom it will fall to make these thankless decisions – were none too pleased when they heard the sunny thoughts of their leaders about the future.

This inevitably brings us to the question of the next government, whose elephantine gestation continues this weekend. To say there is little enthusiasm for the prospect in either party might rank as the understatement of the year. But there is a sort of grim resolve about the business now which I expect will see it brought to a conclusion if and when the worst of the virus outbreak has passed, probably by next month.

The chances of any of the smaller parties being wooed into the fold seem remote at this point: the most likely outcome is a Fianna Fáil-Fine Gael coalition supported by a scatter of Independents.

Such an administration would be the shakiest government we have ever had, leading in the worst of times. Paradoxically though, that weakness might be its greatest strength. A government leading honestly and competently, levelling with its citizens about the choices it faced and the rationale for making them, might be stronger than you think.

Just as the perception of the current caretaker administration has been transformed by the crisis, the public might back a government transparently trying to do the right thing. The best policy would be the best politics.

1 Wife not entitled to deceased husband's entire estate, High Court rules
2 Coronavirus: From midnight Dublin will move to level three until October 10th - Taoiseach
3 President Higgins says British must face up to their history of reprisals
4 Life in Level 3: What will happen under new restrictions in Dublin?
5 Stephen Donnelly dodges the questions as Matt Cooper mercilessly pursues the answers
Real news has value SUBSCRIBE