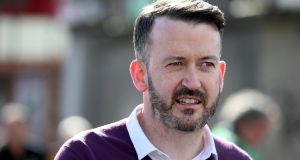 Donal Óg Cusack had hoped to build a four-bedroom house and has appealed the decision to An Bord Pleanála. Photograph: James Crombie/Inpho

Former Cork hurler Donal Óg Cusack has been refused planning permission to build a house on the outskirts of his home village after Cork County Council invoked its “locals only” rule.

Cusack, who was brought up on Chapel Street in the east Cork village of Cloyne, lives in Ballinacurra near Midleton. He had hoped to get planning permission to build a four-bedroom house about 1.5km outside Cloyne.

Citing rules that bar “outsiders” from building in areas where they do not have a strong connection, the local authority refused, saying that Cusack’s ties with Cloyne are with the village and not with the surrounding districts.

In areas covered by such rules, restrictions do not apply to persons who have lived in the area for over seven years.

Cusack has appealed the decision to An Bord Pleanála.