Dogs Trust pauses adoptions of rescue pets until after Christmas 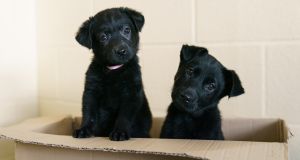 Twelve-week old collie crosses Heidi and Hugo in the puppy wing at Dogs Trust in Finglas, Dublin. The charity has suspended all adoptions from today until January 4th. Photograph: Fran Veale

The largest dog welfare charity in Ireland has paused canine adoptions until next year in order to discourage well-meaning but ill-prepared people from getting a rescue pet this Christmas.

The Dogs Trust, which coined the phrase “a dog is for life, not just for Christmas” more than 40 years ago, has suspended its dog re-homing service from today until January 4th.

It is also bringing the curtain down on its weekly Puppy Cam until the same date, stressing that Christmas was a bad time to take on a dog, especially a puppy.

The charity highlighted the importance of dogs being provided with basic training and positive socialisation experiences in the first few months to set them up for the best start in life. It said many people, even those with the best of intentions, were simply unable to provide this at a busy time like Christmas.

Since the beginning of the year, Dogs Trust has received 2,135 calls and emails from the public seeking to surrender dogs, with 667 of these in the first three months of the year.

January continues to have the highest number of surrenders, with 189 calls and 47 emails received by the charity in the first month of this year. The main reason people gave when looking to give up a dog was that they did not have enough time to look after it.

While rehoming has been suspended, the charity’s centre in Finglas will remain open to the public over Christmas so dogs looking for homes can be visited and the rehoming process can begin with a view to adoptions in the New Year.

“Each year we are saddened and worried by the number of people looking to relinquish their dog, especially in the first few months after Christmas,” Dogs Trust executive director Becky Bristow said.

Ms Bristow expressed the hope that by spreading the message that it would remind people that “a dog is a long-term commitment and will encourage people to wait and consider adding a dog to their family in the New Year instead, when the festivities have died down”.

Puppies are a 13-year commitment, she says, and they’re not a material item to be gifted as a surprise, “they need stability, routine and a calm environment to settle into.

“As wonderful as Christmas is, it just isn’t the time of year to make that commitment.”

The DSPCA have 95 plus dogs and 85 plus cats looking for temporary foster homes – families should be available over the Christmas period to bring the animals back for veterinary treatments and be at home to care for, love and socialise the animals.