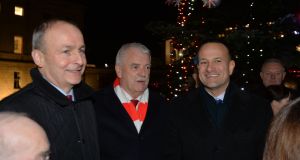 Micheál Martin, Finian McGrath and Taoiseach Leo Varadkar, who is likely to decide over Christmas whether to call an election earlier than his initially planned date of May 2020. Photograph: Alan Betson / The Irish Times

Brexit has long been the glue that kept the fragile Fine Gael-led minority government in place.

Late last year, Fianna Fáil extended the confidence and supply agreement for another year, with party leader Micheál Martin citing Brexit uncertainty as the reason for doing so.

Johnson’s huge majority means the Brexit withdrawal agreement will pass easily through the House of Commons and pave the way for the UK to leave the EU on January 31st. The European Parliament will also have to ratify the deal and is likely to do so in January.

This would mean the formal reason for Martin continuing to underpin Taoiseach Leo Varadkar in office no longer applies. That said, it is likely Martin also wanted to keep Varadkar in power longer to see if his popularity suffered.

In essence, the confidence and supply agreement sees Fianna Fáil abstain on confidence motions and on budgets and their enabling legislation: the Finance Bill, which gives effect to tax changes in the budget, and the Social Welfare Bill.

The obstacles to an election have thus been largely removed and the Taoiseach is likely to decide over Christmas whether to call an election earlier than his initially planned date of May 2020.

The recent motion of no confidence in Minister for Housing Eoghan Murphy, which the Government only won due to the support of three Independents, showed how tight the Dáil numbers are for Varadkar, even if Fianna Fáil abstains.

The resignation of Fine Gael’s Dara Murphy as a TD and other developments – such as Fianna Fáil’s John McGuinness saying he will no longer abstain on confidence motions – means that the Government is potentially facing a 56-56 tie in the event of another motion of no confidence, perhaps in Minister for Health Simon Harris, being tabled in the new year.

Such a scenario envisages the Government keeping the support of the three Independents who backed it last week – Denis Naughten, Michael Lowry and Noel Grealish – and then surviving thanks to the casting vote of the Ceann Comhairle.

The Fine Gael-Independent minority coalition’s precarious position has led some in Varadkar’s party to argue the Taoiseach should dissolve the Dáil either before the House returns after the Christmas recess or in early February.

According to this line of argument, the Government does not have control of the Dáil and would only return to face Opposition pressure, and a potential move to collapse the Varadkar administration with a confidence vote, over a potential winter health crisis.

The Dáil will rise for its Christmas recess this Wednesday and is scheduled to return in four weeks, on January 15th.

The Taoiseach does not have to inform the Dáil that he is seeking its dissolution by the President, nor does the Dáil have to be sitting when a general election is called.

In 2007, then taoiseach Bertie Ahern asked Mary McAleese to dissolve the Dáil early on a Sunday morning.

When calling the 2016 general election, Enda Kenny informed the Dáil he was going to Áras an Uachtaráin to seek a dissolution. The President can refuse a dissolution request from the Taoiseach, which is extremely unlikely.

While the Taoiseach does not need to inform the Dáil of a dissolution, it would be seen as disrespectful to TDs if he did not do so on a day when the Dáil is sitting.