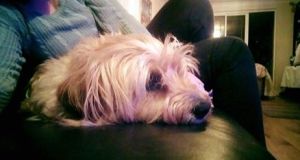 Lydia O’Byrne: “I couldn’t understand who would do that and why they would try to kill our dog Freddie.” Photograph: Lydia O’Byrne/DogofDublin.com 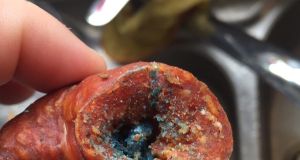 A woman is warning pet owners to be alert after her dog ate a sausage filled with rat poison that was thrown into her back garden in south Dublin last weekend.

Gardaí in Dundrum confirmed they were “making enquiries” regarding the incident that took place on Saturday about 6pm.

Lydia O’Byrne, who owns five-year-old dog Freddie, said she was calling her cairn terrier and King Charles cross-breed dog into the house when she noticed he was eating something from the ground .

Ms O’Byrne, from the Dundrum/Goatstown area, said she looked around her back yard and saw three other pieces of chorizo sausages hollowed out and filled with a substance she did not realise at the time was poison.

“It was confusing and I initially thought it was some sort of mould. My fiance came out and recognised it was rat poison. It was such a shock,” she said.

“I couldn’t understand who would do that and why they would try to kill our dog Freddie.”

Ms O’Byrne said she brought Freddie to UCD Veterinary Hospital’s emergency clinic where he was treated immediately and survived the incident.

“We were lucky we noticed after one piece. Rat poison would have resulted in internal bleeding, which could have shut down Freddie’s organs,” she said.

“The vet confirmed that the piece that Freddie had ingested was enough to give him a pretty grim outlook.”

Ms O’Byrne said Freddie had recovered from the incident and was back eating normally again.

“Freddie’s always happy to see everyone – a very friendly dog. He was lethargic but getting back to himself again,” she said.

Ms O’Byrne said the couple reported the incident to the gardaí and urged dog owners to check their gardens before leaving their dog out.

“We’re really upset over it . . . I don’t know what could be in someone’s head to do something as vile as that.

“Hopefully we will be able to find someone accountable and stop them doing it again.”