Doctors ‘shooting themselves in foot’ by campaigning against FG, Varadkar texted Ó Tuathail 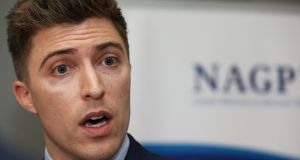 Dr Maitiú Ó Tuathail: In his reply to the GPs representative, Leo Varadkar wrote: “Hopeful talks with IMO will result in a deal on increased resources but they have to be realistic.” Photograph: Eamonn Farrell/RollingNews.ie

In text exchanges in October 2018, the then-taoiseach also warned Dr Ó Tuathail that ongoing discord among GP groups might disadvantage them over other groups seeking concessions from the Government, saying “we need to cut a deal with you soon. Only a limited pot [of money] and nurses and consultants are much more effective at getting something from it”.

Earlier in the exchange, the then-president of the National Association of General Practitioners (NAGP) warned Mr Varadkar that GPs were discussing “actively campaigning” against Fine Gael.

“Including posters in waiting room, handing leaflets to patients and placing posters on lampposts,” said one of the text messages, released to The Irish Times under the Freedom of Information Act.

In response, Mr Varadkar texted: “Who will [they] campaign for. SF and leftists want you all on salaries and not big ones. Maybe €60k. Labour wants free GP for everyone within a few years. Foot and shoot spring to mind.”

In his reply to Dr Ó Tuathail, the then taoiseach continued: “Hopeful talks with IMO [ Irish Medical Organisation] will result in a deal on increased resources but they have to be realistic. Budget is limited even with the extra billion” – a reference to a further increase in health funding of €1.05 billion signed off in Budget 2019, which had been announced two days before the text exchange.

Dr Ó Tuathail responded by saying: “We are rightly f****d I know this. It’s just frustrating. Like campaigning for FF. I think I’ll resign before I do that.” Mr Varadkar said: “Only way to stop it is for GPs to sign up to a deal that’s affordable for the taxpayer and good for patients – phased reversal of Fempi [recession-era cuts], new money for new services and phased extension for free GP care to those on lower incomes.”

Mr Varadkar told the NAGP president that the “biggest problem from our point of view is that GPs are fighting among themselves and don’t know what they want or are willing to give in return for more resources”.

Sections of the text exchange are redacted, but Mr Varadkar then continues: “Anyway IMO and NAGP can come together and agree something along these lines. We need to cut a deal with you soon. Only a limited pot and nurses and consultants much more effective at getting something from it”.

Dr Ó Tuathail responded, saying the two organisations would “never come together”. “We’ve the members but they’ve the power. S**t situation all round.”

Dr Ó Tuathail and the Tánaiste were at the centre of a controversy in November when it emerged that Mr Varadkar had leaked the NAGP president a copy of a confidential pay deal with a rival group, the Irish Medical Organisation (IMO), before it was published or finally signed off.

Mr Varadkar has said that what he did was “not best practice”, but that it was done in order to secure the agreement of all GPs for the deal. The Opposition strongly criticised the Tánaiste over the leak, saying he had abused his position as Taoiseach, and that the leak may have benefited the NAGP, an organisation which collapsed soon afterwards. The Fine Gael leader and Dr Ó Tuathail are friends, “but not close friends”, Mr Varadkar has said.

In a separate exchange, the day after the budget, which extended free GP care to tens of thousands more people, Dr Ó Tuathail told the then taoiseach: “I think the budget may have been the last straw for GPs. I have never seen them so angry.” In response, Mr Varadkar asked whether it was not the case that GP groups wanted to expand eligibility on income rather than age, “and it’s in Sláintecare”. Given that was the case, he said anger at the implementation of these policies “is kind of irrational”.

A further text exchange the following month shows Dr Ó Tuathail recommending to the taoiseach a business project – Community Hospital Ireland – being worked on by Chay Bowes, a healthcare entrepreneur who was at the time working with the NAGP. Mr Bowes and Dr Ó Tuathail had also discussed working on the project together. Mr Bowes later supplied documents, including screengrabs of conversations between Mr Varadkar and the NAGP president, to Village Magazine for the story which caused the controversy.

“Possible solution to lack of winter initiative being launched in Tallaght in January – called Community Hospital Ireland. Great idea, and one you guys should take credit for. Seriously,” wrote Dr Ó Tuathail.

Asked for more information, the NAGP president said it was “a national community intervention team” privately funded but backed by the HSE. “Basically nurses treating patients in their home.”

The records released to The Irish Times do not show any further engagement from Mr Varadkar on the matter.