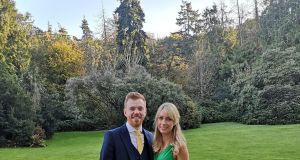 Mark Hession and Sandra Murphy who are due to get married in Co Kerry next week.

Live music and dancing are not allowed at weddings held in hotels this month, under official guidance issued by Fáilte Ireland this week.

A couple due to marry next week in Co Kerry say they do not even know if they will be allowed to have their “first dance”.

Under the current Level 3 restrictions, up to 25 guests can attend a wedding ceremony and reception, excluding the couple getting married and hotel staff.

Live music and dancing is not permitted under guidance issued to hotels and guesthouses. It also states that high noise levels within a premises can impact conversation negatively and encourages customers to raise their voice to communicate “thus encouraging possible transmission of the virus”.

“Hotel owners and management should be aware that permitting increased noise levels within their premises is an unnecessary risk as it forces customers into close proximity and encourages raised voices,” it says.

“Hotel owners and management are responsible for keeping noise at an appropriate level to help prevent the spread of Covid-19.”

Both live music and dancing at weddings in hotels were previously allowed during Level 3 restrictions in September and October. They were not permitted under Level 5.

Mark Hession and Sandra Murphy are due to get married in Dingle next Friday. The couple were originally due to wed in June with 190 guests but had to change their plans because of Covid-19 restrictions.

“At the last Level 3, music was allowed and I suppose there was no indication that it was going to be any different this time round,” Mr Hession said.

“The hotel presumed it would be like the last Level 3, but they then announced there was a blanket ban on live music and dancing.

“They’re also saying you can’t have loud music in case people have to talk loudly so we’re not even sure if we can have any.

“We don’t even know if we’re allowed our first dance because they said dancing isn’t allowed.”

Mr Hession said he and his fiancée only learned about the restrictions to dancing and music on Thursday and have since cancelled their band.

“They were gutted as well because all their business is gone. They were pretty good about it and very understanding,” he added.

“You build up a certain resilience after having to chop and change so many things but I think the main thing for us is the eleventh hour nature of it.”

Fáilte Ireland, the National Tourism Development Authority, said no live music or performances are permitted in the hospitality sector currently and that each level of the Government’s Covid strategy is altered in accordance with the trajectory of the virus.

The Irish Hotels Federation said it was disappointing that dancing is not permitted “even if wedding guests are only to dance with members of their own household”.

“It is especially disappointing that the wedding couple themselves cannot now even have a first dance,” it said.

“Given the small number of people attending and the large spaces involved, it is also very disappointing that the Government has decided to prohibit live music at weddings, including during the ceremony as well as wedding bands during the reception.

“This is particularly more difficult to understand given that thousands of weddings were hosted since reopening in hotels with no reported issues.

“Our observations of bands have been that they have clear Covid-19 processes in place with all musicians except for the singers wearing masks. All were socially distant from each other and from guests.”