Distressed man leads to discovery of 23 ‘slaves’ in Meath 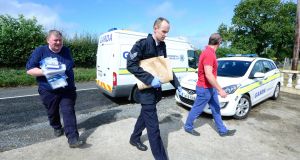 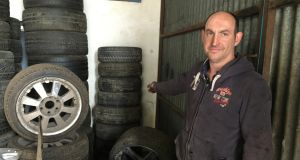 Paul Cassidy of Cassidy’s Tyre Centre at the junction of the R162 and N52 near Nobber in Co Meath points to the pile of tyres behind which a frightened east European man cowered on Thursday. Photograph: Peter Murtagh

Thursday was an uneventful day at Cassidy’s Tyre Centre, at the side of the R162 in Castletown, near Nobber in Co Meath – until a middle-aged man made a run for the garage from a cottage over a kilometre away, clutching a piece of paper.

On it, was written the address of the house, from which he was running, and just two other words – “help” and “garda”.

Within hours of the frightened man, with little or no English, scuttling into Paul Cassidy’s shed-like garage and cowering in a corner, hiding among a pile of used tyres – a Garda helicopter was hovering over the cottage and an armed support unit, two Garda dog units, about 30 gardaí and a fleet of patrol cars had surrounded it.

“This poor divil was frightened. Every car that slowed down at all [on the road outside], he was burying himself into the corner.”

The cottage, from where the man ran, is a very ordinary, single-storey building on the southern side of the N52 between Nobber and Castletown, positioned at right angles to the road.

It has a dreary, unloved look about it: on one side there is some poorly kept grass and an attempt at a conservatory-type extension but, otherwise, nothing that would merit the description of garden.

The main entrance is on the other side, from a wide concrete drive that balloons into a large yard, running along the side of the building and extending to the rear.

Beyond it, is a large breeze-block, pebbledash and metal-roof building that dwarfs the house.

The purpose of this building is unclear and while there were a number of vehicles parked to the rear of the property Friday, there was no evidence to indicate what goes on in the complex. But the man who fled from there Thursday afternoon, at about 3pm, did not want to be there.

By the time he walked, or ran, along the narrow N52 to the R162 junction and sought refuge in Cassidy’s garage, he was frightened and made gibbering pleas for help.

He was wearing a brown jacket, shirt and jeans and looked to be in his mid-to-late 40s. Despite his situation of evident – but, as yet, unexplained, distress – he did not appear dishevelled or poorly fed.

He hurried through the large opening into the tyre and equipment-littered workshop.

“Poor divil,” Mr Cassidy said Friday, “he was all shaky and everything, so he was.”

The man tried to explain himself to Mr Cassidy.

Mr Cassidy, a calm man, thought for a moment and said: “OK, what do you want me to help with?”

“And he was, there, basically saying he needs guards. He goes something [about] ‘held at ransom’, and he goes [pointing his finger to his temple, making the shape of a gun] and he goes ‘boom, boom’. . . ”

The man was silhouetted in the doorway and soon edged his way into a corner, to the right of the entrance.

There, used tyres are piled high, silo-like, in rows up against a wall – up to 10 tyres stacked on top of each other.

There are smaller piles at the front, including four new types, apparently waiting for a vehicle. The man hid behind these tyres.

“I was like, ‘oh, OK’. So he sat down here, on the tyres, and then he started burying himself into the corner every time he heard a car slowing down.

“I was there and, really, he’s not, not messing; he didn’t look like a lad that was messing. All I could do was say, ‘listen, I’ll get you help, don’t worry’.”

Mr Cassidy said: “As far as I could get from him, he’s saying that his family was at ransom, or something like that. This is what I was getting from him.

“He’s saying that there’s guns and everything, that someone’s holding him ransom below [in the house].

Garda Colm McNally was manning the part-time station in Nobber when he was ordered to drive to Cassidy’s garage and see what the fuss was about.

As the man and the Cassidys waited for help to arrive, the man tried to explain his situation further, showing what may have been a payslip – suggesting, possibly, that he was owed money.

When Garda McNally arrived, the man appeared hugely relieved but also concerned for the other people in the house whom he had left.

By the time the multiskilled Garda taskforce descended on the cottage about four hours later, they were not entirely sure what to expect.

But, inside the house, they discovered 14 people whom they suspect were unwilling migrants working, in effect, as slave labour.

They arrested six people, three men and three women, one of them a juvenile.

Eight more people returned to the house while gardaí were there and – along with the original 14 – they were taken away to be looked after.

The 23 people, including the man who ran to Cassidy’s, spent the night in Dublin.

Gardaí suspect duress in some form amounting, in effect, to false imprisonment may have been exerted over the people in the house, perhaps by withholding money from them.

Darker suspicions relate to possible pressure put on families in their home country, understood to be Romania.

Local, Tom Clarke said the arrested occupants of the house had only been there a few months.

No one had noticed anything unusual but, in any case, he said, people in the area generally kept to themselves.

“You don’t really know what’s going on around you, you really don’t, and you don’t like to get involved.”