Dismay and elation on first trading day in post-Brexit Holyhead 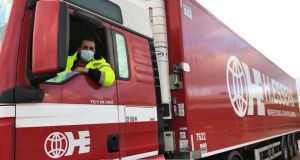 Radoslav Radev cut a lonely figure as he stood by the freight check-in cabin for the Stena Line ferry to Dublin, handed in his papers and waited.

After just a few moments, the woman inside the cabin pushed her arm through a small opening in the window and returned them. He craned his neck, listening to what she had to say.

He would not be permitted to enter the port area proper, she told him.

“You need a BPN number now after Brexit, ” she says.

It was 10.30am, Friday, January 1st and Britain had got Brexit done – really, finally and completely done – less than 12 hours previously. Membership of the single market and customs union, allowing for the free movement of people and goods, now replaced by a UK-EU trade deal and all the paperwork that comes with crossing an international frontier.

Radev seemed none the wiser as he shuffled back to his bright red articulated lorry, the property of H Essers, a huge warehousing, transport and logistics company headquartered in Genk, Belgium.

He had hoped that before the day was out he would have crossed the Irish Sea and delivered his non-Covid related healthcare and pharma load to its destination in Dublin.

By mid-morning on Friday, the unfortunate man was the seventh trucker refused entry to the north Welsh port because of failure to comply with new regulations.

Truckers moving goods in either direction across the Irish Sea must have export clearances from customs and revenue authorities in the UK or Ireland before they set out.

Without a pre-boarding number (PBN), and PBN identifier, plus a master reference number (MRN), then the goods and truck are going nowhere.

Each load must have its own unique PBN. On arrival at the port, the 10- or 13-digit number is scanned. If properly logged with the Irish and UK authorities then truckers, literally, get a green or red light.

Though it will require time for everyone to learn the ropes, the new system is, nevertheless, fairly straightforward, says Ian Davies, head of UK Ports at Stena Line.

“The Irish Government have a database and the UK government have a database and you, as the importer/exporter, are lodging your documentation into those databases and we, as the shipping company, have a link into those. From a port perspective it is a relatively simple process . . . as long as the importer/exporter or haulier has done all the documentation lodgment,” he says.

Davies and his colleagues, who effectively run Holyhead Port, have prepared for all types of a Brexit departure by the UK, liaising closely with the Welsh government, UK customs and Welsh police.

Tests at Holyhead – the second busiest British port after Dover and crucial for deliveries to all parts of the island of Ireland, not just the Republic – were still under way up to 6pm last Thursday.

Twenty years ago, Holyhead handled 70,000 trucks or containers. Last year that figure jumped to 450,000 – an average of some 1,250 trucks daily between the two ferry companies, Stena and Irish Ferries.

“The growth has been exceptionally strong. And a lot of that has been down to just-in-time logistics and you get a frequency [of ferry services] with Holyhead that has attracted traffic from Northern Ireland, ” he says.

One-fifth of the haulage firms who use the shipping route carry 80 per cent of the freight. Most of them are well prepared. “We focused on those 20 per cent. Generally, the level of their preparation is pretty good,” he says.

“What we’re not really sure about, because we don’t deal with them directly, is the tier underneath; not the hauliers, but the importers and exporters who use the hauliers. Those are the people who will generate a lot of the administration that is required,” he says, adding that the day’s few rejections show – if nothing else – that the system is working, albeit with low volumes.

However freight traffic will not be back to normal until late next week, following the new year weekend and a slowdown caused because pre-Christmas stockpiles to cope with feared Brexit chaos.

If large numbers of trucks are turned back from the port, they will go to a truck-stop cafe outside Holyhead where the Welsh government and customs have set up a multilingual problem-solving service.

There, 200 trucks can park and additional space is being added. If that fills up, one side of a five-mile stretch of the A55 dual carriageway out of Holyhead will be turned into a parking lane.

Marcia accepts there will be teething problems with the new arrangements.

“Initially, it’s going to be a bit of a nightmare,” she says. “But once they get it sorted, it’ll be fine.”

By now, Radev has left the left port and driven to the truck stop. Later, I find him there, pacing about the hard stand, with a mobile phone to his ear.

I raise an inquiring thumbs up/thumbs down at him.