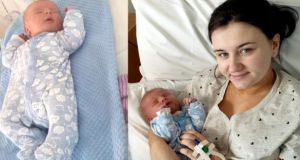 Brodie McWilliams Brown with his mother Jennifer McWilliams after his birth at four seconds past midnight in the National Maternity Hospital, Holles Street, Dublin.

The first baby born in Ireland in 2021 was born at four seconds past midnight to a Covid-positive mother at the National Maternity Hospital (NMH) Holles Street in Dublin.

Brody McWilliams Brown arrived just after midnight. His 19-year-old mother Jennifer McWilliams is doing fine. She was diagnosed with Covid-19 on December 22nd and alerted the hospital. All protocols were followed for her care.

She did not know how she came to be positive for Covid-19, but her symptoms were mild and she was able to proceed with the pregnancy.

The child was born a few weeks early and weighed in at a healthy 7lbs and 10oz.

Speaking about the birth, Jennifer said, “Brody surprised us by coming early, it is a fantastic start to the New Year. We cannot believe that he is the first baby born in Ireland in 2021.”

“ I would like to thank all the staff at the National Maternity Hospital who have just been brilliant and have taken the best care of both Brody and I despite me having Covid-19.”

NMH master Prof Shane Higgins congratulated Ms McWilliams on the birth of her baby and thanked her for alerting them with her result before coming into hospital. “ It’s ironic that the first baby born in 2021 at the NMH is to a Covid-positive mum,” he said thanking staff for their professionalism, and empathy throughout the pandemic.

Brody was followed by the birth of a baby at Cork University Hospital at 12.01am. Baby Foley arrived at 12.01 and seven seconds, according to his father, Michael, who has spent much of his career watching the clock at sporting grounds at home and abroad.

The as-yet-unnamed boy was born on the final whistle with time added on at Cork University Hospital weighing a healthy 4.16kg (or nine pounds two ounce).

Michael Foley is a Sunday Times sports journalist and the author of the acclaimed book The Bloodied Field about the events of Bloody Sunday 1920.

After the baby was born, Mr Foley tweeted: “This mighty little man joined us last night at a minute past midnight, ushering out one difficult year while reminding us of the possibilities the future always holds, however bleak the present might seem. Life always goes on. Happy new year everyone!”

Mother Karen Clarke-Foley and baby are doing well. The couple who live in Macroom now have four children, all boys from six years old, down. It is enough to fill a full-forward line with a substitute on the sideline.

“It was a pure fluke,” Mr Foley said. “They had it on a monitor. It was 00.01.07.” Baby Foley was due on December 28th. “It was a hard year, but we always had the thought that we would hopefully have a baby at the end of it. Even before he was born, he was giving us a bit of hope.”

The third baby born in the State in 2021 was born at University Maternity Hospital in Limerick at 12.04am, but the details of that birth are not being released by the hospital.

However, the hospital said seven babies were born between midnight and 7am. Weronika Wroblewska’s daughter Alexandra was born at 12.49am.

At 6.36am baby Alia was born to the well-known millner Aisling Maher who lives in Castletroy, Co Limerick.

Business owners have been through a terrible year due to the pandemic and with so much of her business relying on special occasions such as weddings, Aisling said she was looking forward to 2021 with renewed hope.

“The one good thing about 2020 was the way in which we have been able to reflect about the important things in life and getting ready for Alia has been a real focus for us,” she said.

The first baby born in Dublin’s Coombe Women and Infant’s University Hospital after midnight arrived into the world at 12.24am.

The baby girl, named Kady (3.95kg) was born to Vanessa and Garry McLaughlin from Co Meath. She is Vanessa’s second baby, with baby Ava born in the Coombe 19 months ago.

The first baby in the Rotunda Hospital, Ireland’s busiest maternity hospital, was born at 12.31am Ríona was born to parents Ursula Ni Shionnain and Dean Mac Aogáin from Dublin. Ríona is the couples first child.